Well we are now into February already and it’s time to check in on the past month to fill in the gaps not covered by the past few posts.
The Painting and purchased tally 2018:
Well the year’s painting tally has yet to get off the mark but I did do a reasonable amount of work during January. My efforts focused on two areas, Bush Wars and Soccer players.
After recently playing another fun game of Striker (See previous post) I decided that I want to play more of this excellent game and would like a bit more variety in the teams I can play.
So I headed off to Eureka miniatures and picked up two more teams (14 players per side with substitutes). While I was there I also picked some nice farm animals for general tabletop scatter.
This brought my month’s purchases to 37.
I decided that I would paint up one team as West Ham United and the other team as Tottenham Hotspurs. I’m not so much of a perfectionist to paint away strips for teams so I make sure that the teams I paint can play in their normal colors and will not clash with my other teams.
As soon as I got these home, they were cleaned up,based ,and undercoated (in white) in quick fashion and I started painting them. Unfortunately they weren’t finished before the end of the month so they will go into February's totals. 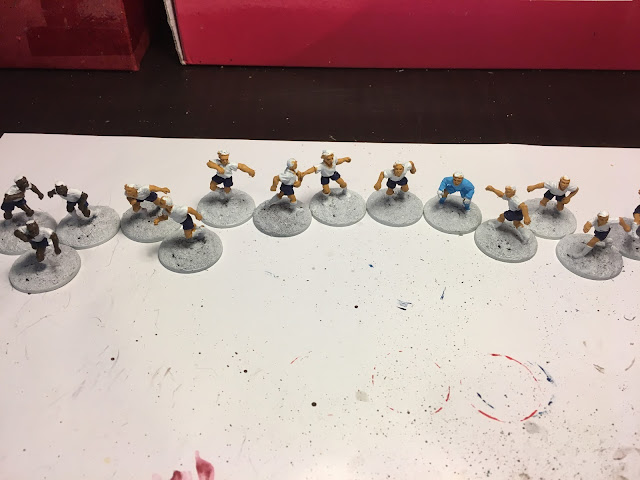 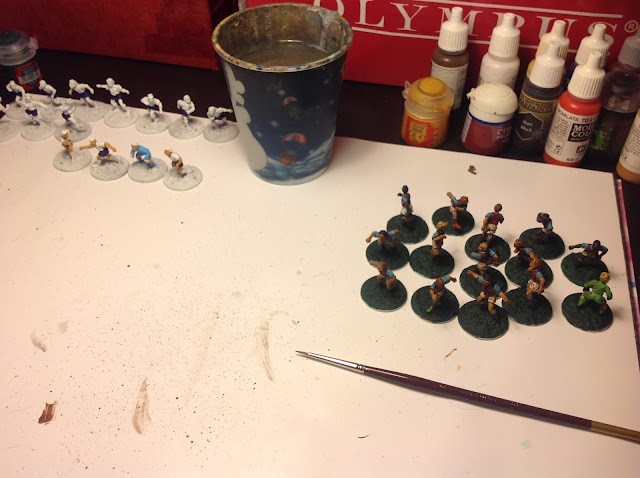 The other project was Bush Wars vehicles. I assembled two trucks and a couple of helicopters and undercoated them in white. In assembling the helicopters and vehicles I had to check myself when it came to the interiors. As they are supposed to be wargame models not scale models (and the models don’t come with crew figures) I decided that I don’t need to paint the interiors and can just paint the windows blue and that will be okay.
However I cannot rule out one day painting the interiors so I glued the glass in with PVA glue (easily removable) and before spraying with white undercoat spray I gave all canopies/windows a thin coat of Vallejo primer medium. This medium is a type of rubber polymer so I should be able to carefully peel it away to expose the clear glass if I ever want to convert back to a scale model. 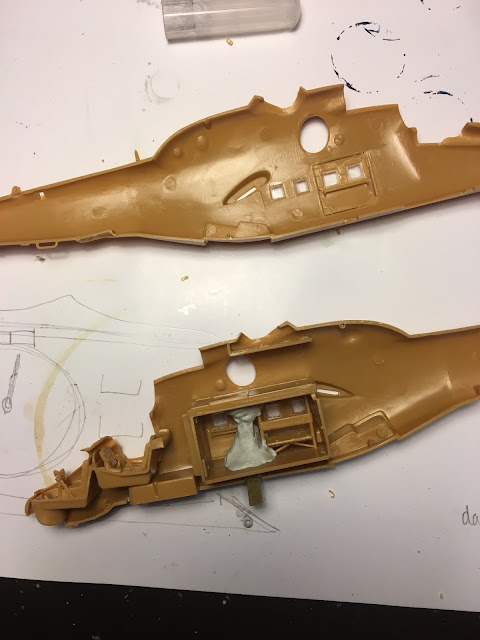 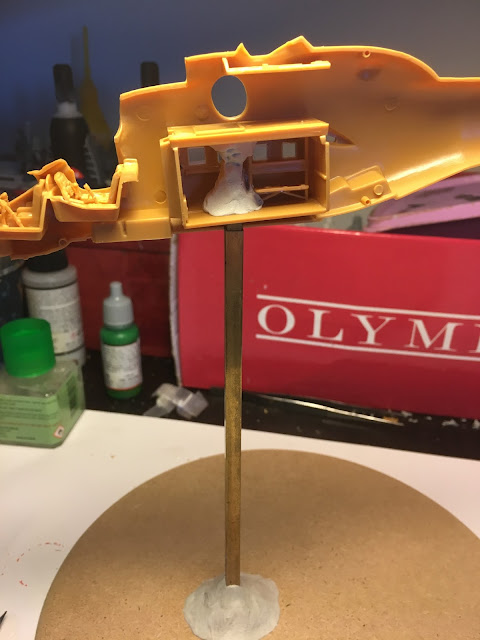 Some brass tubing and "Knead-It" polymer putty for a helicopter mount.
I have three Resin APCs for Bush Wars but they aren’t the best quality so I decided to go on eBay and I purchased three BTR-60PB to replace them. The resin APC will be sold off. These new models should arrive next month.
Once the APC are assembled and undercoated I can finally break out the air brush and do all the camouflage paint jobs in one go. Then it will be a relatively quick job of painting the details and weathering the models.
I will also have to print off some homemade decals of the UmBongo flag to stick on the models. 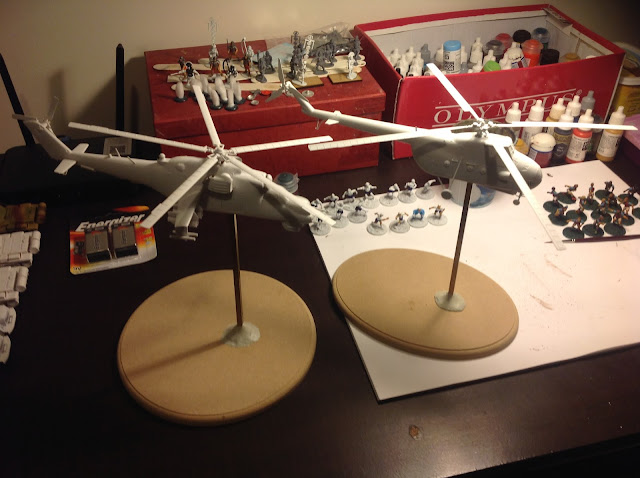 A old Hound for troop transport and every African despot must have a Hind gunship! 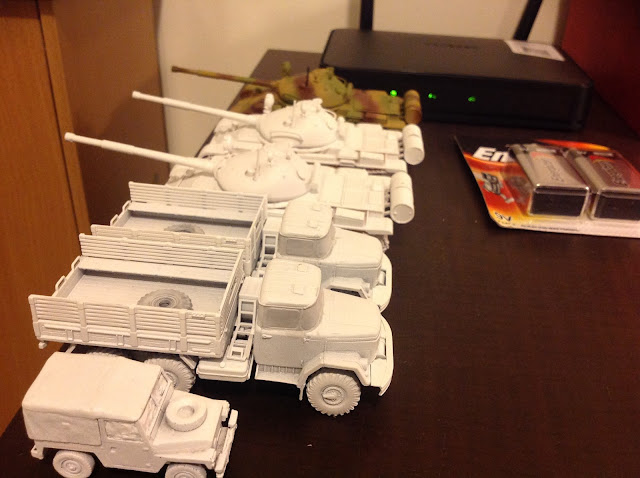 The UmBongo vehicle park...
So in short plenty of activity but nothing quite finished. Painting tally: 0
In an interesting crossover project there is talk that I should paint up an UmBongo national soccer team to play arch rivals Umgawaland. I could imagine a fierce match between these two African minnows interrupted by a pitch invasion by a T-62!!
On the gaming side I managed games of ECW, Striker, and Dragon Rampant (to be covered in a later post). On the board game front we played Labyrinth (with the new goblin expansion) and also a game of Star Wars rebellion. 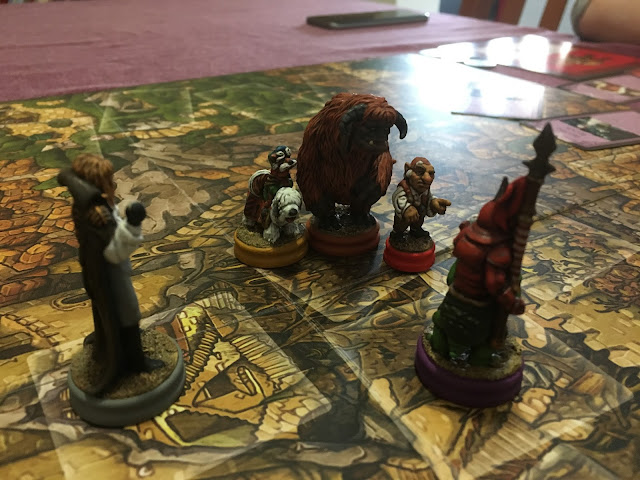 Star Wars rebellion looks like a fun game but I will give it another play through before writing a review. It did certainly tick the boxes if you’re a fan of the original trilogy. 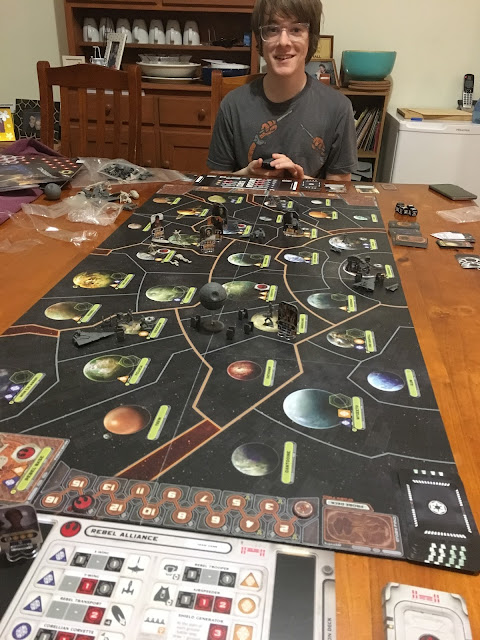 The evil face of the Empire!!
I was happy to see the release of the new boardgame The Dark Crystal by Riverhorse games. I picked up a copy at a local comic book store and we played our first game. 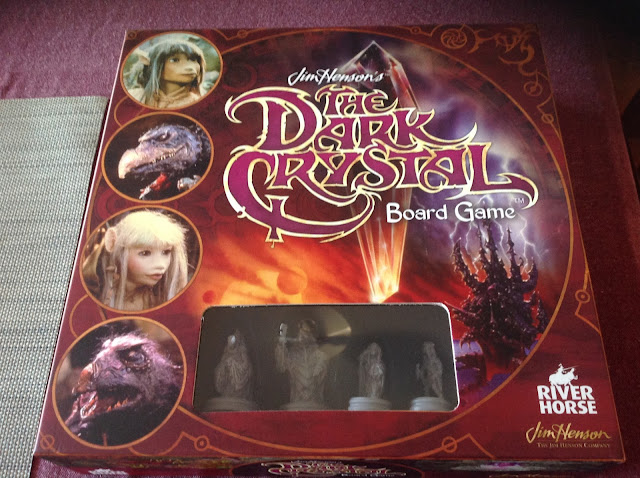 The game has a similar look and feel to the Labyrinth game and does share some similar mechanics. We did have a bit of an issue with the Garthim rules but this was fixed a couple of days later with a quick Errata by Riverhorse. It’s a bit annoying this error wasn’t picked up in proof reading but oh well.
I will play another game before reviewing this one. I am certainly looking forward to painting the models!
And finally we come to the dreaded topic of kickstarters.
This month I backed two kickstarters, the first was Fourth Quarter football. A miniatures board game based on American Gridiron and the second was U-Boot a cooperative board game where the players are controlling a WW2 German U-Boot with an interactive App to control the enemy.
https://www.kickstarter.com/projects/phalanxgames/uboot-the-board-game 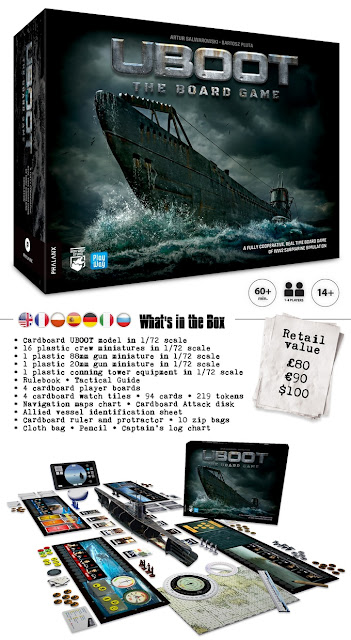 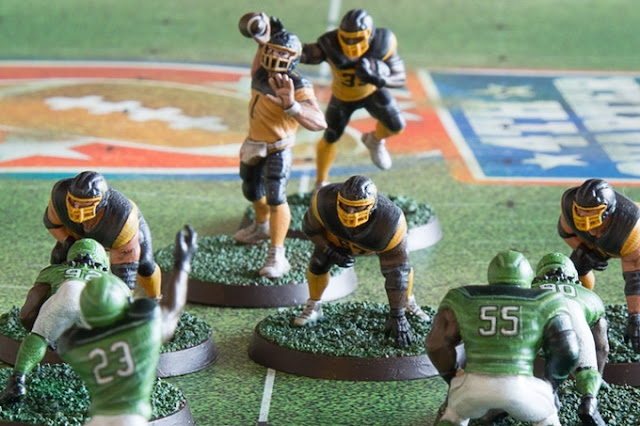 These both look like fantastic games but in the end buyers remorse kicked in and...I cancelled my pledge. My reasons were as follows:
U-Boot: a fantastic game but I know the reality will be I would play this maybe once a year. I couldn’t really justify the cost at the moment.
Fourth Quarter football: Again I would not play this very often and as there were no Kickstarter exclusives I don’t really need to buy this now. I can buy it later on in retail (although it will cost a bit more).
So in the end my willpower held and I did..sort of.. resist the curse of the “new shiny”
And that’s it. A reasonable hobby month with some sensible purchases. Hopefully February will see me finishing some of these outstanding projects.
Bye for now!
Posted by Neil Hughes at 10:57 AM