Here are some pictures of the first production model Martian now painted. The Martian is now ready for sale through Eureka miniatures. Keep checking their website for official notice. http://www.eurekamin.com.au/ 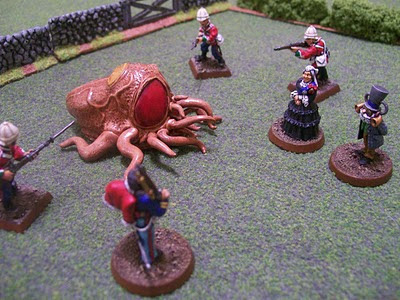 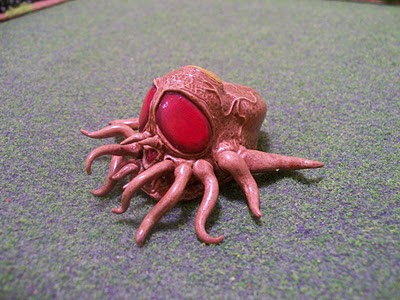 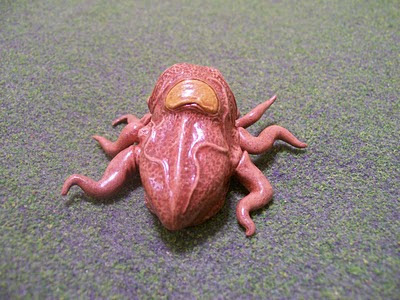 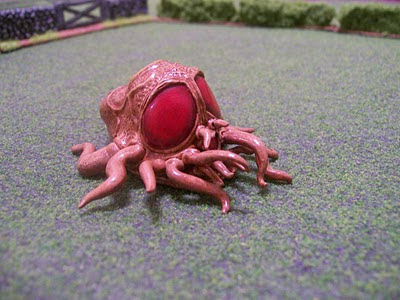 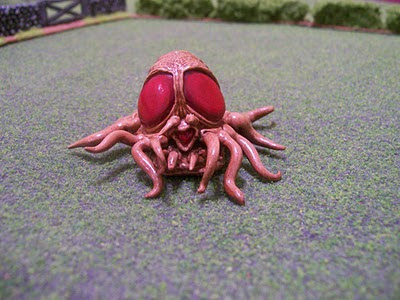 If anyone wants to paint their Martian the same as mine, this is what I did.
Resin body was cleaned in detergent and any small air bubbles filled with putty or removed with a dremel. The metal tentacles were are drilled and pinned and glued with super glue (important). The completed model was then undercoated in Chaos Black.
Base coat was GW  Lyanden Dark Sun foundation paint. When dry this was given a wash of Bestial Brown and then drybrushed with a 50/50 Bestial Brown/Skull White mix.
Eyes and mouth were Mechrite Red foundation paint, followed by a wash of Scab Red and highlights with Blood Red.
Ear drum was Lyanden Dark Sun base coat, followed by thin coat of Snakebite Leather and then a wash of Gryphonne Sepia with a light dry brush of 50/50 Snakebite Leather/Skull White to finish.
When completely dry the model was given a good coat of a satin varnish.
Posted by Neil Hughes at 7:26 PM 4 comments:

Recent photos have now been released from those terrible events caused by the Martian invasion of southern england last year. While our defensive efforts around Woking proved unable to halt the Martian advance on London. Further north a crashed cylinder was able to be surrounded by a detachment of the 24th regiment of foot lead by Lt Bromhead and assisted by Colonel Shaftsbury. It appears this cylinder may have landed off course, since it did not come down in the usual " tri pattern"  observed elsewhere in England.

When the Martians emerged from their cylinder the 24th lead a gallant charge into the pit where they were able to quickly kill the surprised Martians.

One Martian was able to climb out of the pit and try to escape, but it was surrounded by the 24th and captured. The following photographs provide the only examples of a live Martian to date. 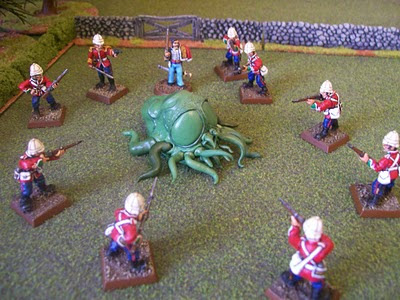 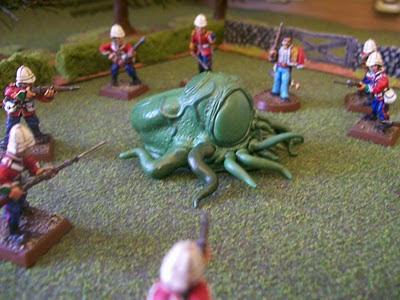 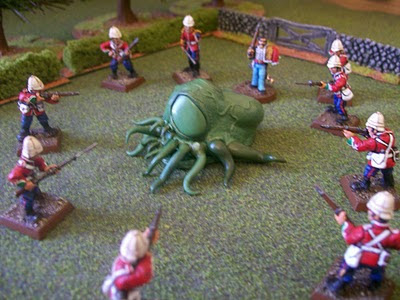 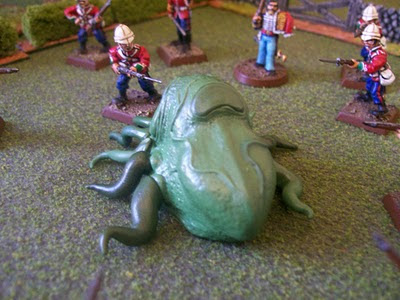 This photo shows clearly the tympanic organ that acts as a primitive ear. More suited to the thin atmosphere of Mars as suggested by astromoners. The bayonet wielding soldier in picture is Lance Corporal Jack Jones of the 24th foot. Afterwards  he was heard to say that the Martians "Don't like it up em! sir" 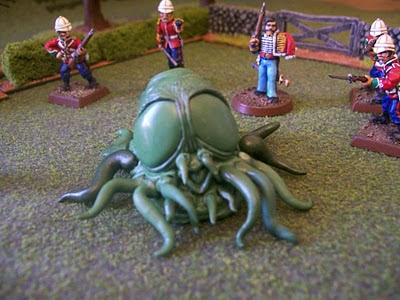 The Captured Martian was held in captivity for several days but eventually like its brethen succumbed to disease and died. Its body has been preserved and is now on display at the national museum.
This model is the finished "green" master that will form part of my Martian range of models and miniatures.
The body will be cast in resin with white metal tentacles that can be bent and posed. The model will be available through Eureka miniatures http://www.eurekamin.com.au/ soon.
Cheers Neil.
Posted by Neil Hughes at 1:58 PM 6 comments:

The Battle of Britain - John Ray 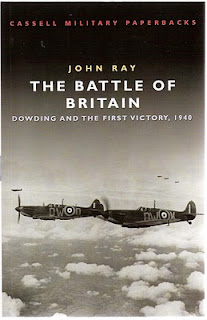 I have just finished this book and thought I would put up a quick review. Firstly my view point of the Battle of Britain is largely based on the well known film of the same name and the odd bit of reading here and there, so I have a general and somewhat romantic knowledge of the battle.
We know the story, outnumbered gallant british (and colonial, polish , czech) pilots ,outnumbered and out gunned take on the might of the Luftwaffe and defeat them. Hugh Dowding the commander of fighter command lead this band of the "few" to victory but was replaced as head of fighter command shortly after the battle.
Several books have been written on this subject (none of which I have read) but John Ray sets out to give a balanced unbiased account of the possible reasons for Dowding's removal.
If you are looking for a dramatic action packed review of the daily dogfights during this battle I suggest you put this book back on the shelf and look elsewhere. This book goes into incredible depth, sifting through the many memos, letters, reports, interviews etc. of the period to piece together the machinations of the RAF, Air ministry and politicians in the eventual removal of Dowding. It is a bit dry reading but incredibly interesting.
Leading up to the war Dowding took command of an ill prepared british fighter defence force and turned it into the best fighter defence in the world by the time the battle of britain began. He championed the cause of Radio Direction Finding ( now known as radar) and prevented fighter's being gobbled up in the disaster of the defence of France. Dowding was ably assisted by Keith Park who then took command of 11 group. The group which was to be pushed to breaking point in the ensuing battle. Dowding plan was to fight a defensive battle to conserve his forces and keep britain " in the war" until the weather turned bad and the possible german invasion was averted.
However once the battle began disagreements arose between his subordinates over tactics, in particular Leigh-Mallory commander of 12 group who advocated "Big Wings" to aggresively attack the germans in large numbers versus Park commander of 11 group who prefered a single squadron response.
Dowding comes across as indecisive and reluctant (almost stubborn) when it came to adopting new tactics in a changing battlefield.
Dowding and Park spent the entire battle defending their position from criticism coming from within the RAF and the air ministry on an almost daily basis when they were supposed to be fighting the most important battle in their nation's history. Air vice marshall Douglas comes across in this book as very ambitious and keen to see Dowding's removal and actively worked to see it happen. By November Douglas had succeeded and he took over command of Fighter command.
This is a fascinating book. John Ray is like a detective piecing together the many sources to give an accurate and even handed view of Dowding's command and the behind the scenes movements to have him removed.
A must read for any person interested in a serious examination of this famous battle.
Posted by Neil Hughes at 5:23 PM No comments: