So The English Civil War has always been a favourite period of mine and I have always wanted to play it in 28mm scale. The arrival of the Warlord Games plastics was the final impetus I needed to get started. Looking back on the blog I started this army back in late 2009. It's hard to believe it has been so long!
Well as I am doing a reboot of the blog, it is high time the army got its first official parade. The army is a good size for most games but definitely needs at least another two regiments of horse in the short term.
The full army in review consisting of:
5 regiments of pike and Shotte
1 regiment of commanded Shotte
1 regiment of Dragoons
2 regiments of horse
5 cannon
4 Commander bases
The final army when completed will have an additional 6 horse regiments, 3 regiments of foot and another commanded Shotte regiment and some more commanders. I will also add the little extras like horse holders for the dismounted dragoons, petard team, sniper, and baggage train with wagons etc. some field works are already done. 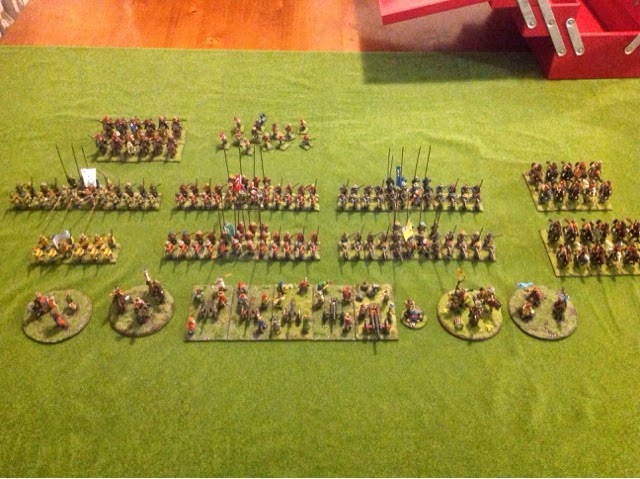 From the early days I reduced the size of the Shotte sleeves from 12 figures down to 8 and reduced the pike block to 12 men. This enabled me to make a new regiment from the leftovers and the unit still has the right "look". I also plan to reduce the size of the horse units to 8 horse per regiment for the same reason. We use the Blackpowder Pike & Shotte rules for our games so the number of figures is not as critical since we use casualty markers. 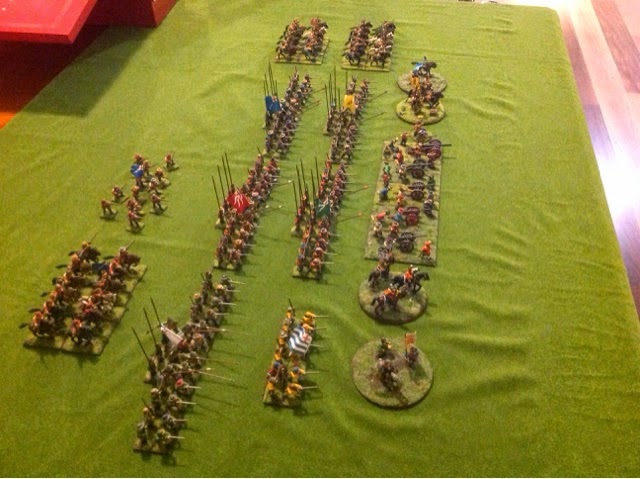 On the subject of rules we tried a few rulesets before settling on Blackpowder. We tried the Perfect Captains rules called Civille Actions. It had the necessary historical fluff but the rules themselves were fairly ordinary. Then we tried Victory Without Quarter. These rules were okay although the moral system was a tad brutal. Some of the game mechanics were similar to Blackpowder but the rules were rather undeveloped. We did look briefly at Warhammer Civil War and 1644 but they were not for us. However 1644 has a great campaign ruleset which I am modifying for our planned ECW campaign.
So why did we choose Blackpowder? Well firstly the game is quick! We have played games with four players per side each commanding a brigade and played to completion inside four hours. For such a huge game I challenge any other ruleset to get a result in that time. It does take a few games to get used to the rapid movement (or no movement if you fail a command roll) and large musket ranges but after a while the rules, while on first impressions seem simple, are quite nuanced. Most importantly games have the right ECW "feel". For me this is the most critical thing about any ruleset. If it does not feel like I am playing the period then it doesn't work. 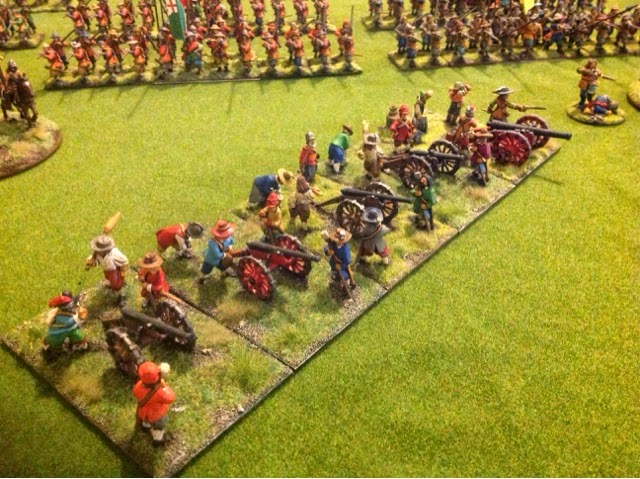 The mighty Parliamentarian guns. In actual fact rather bloody useless except at close range where they are quite deadly. 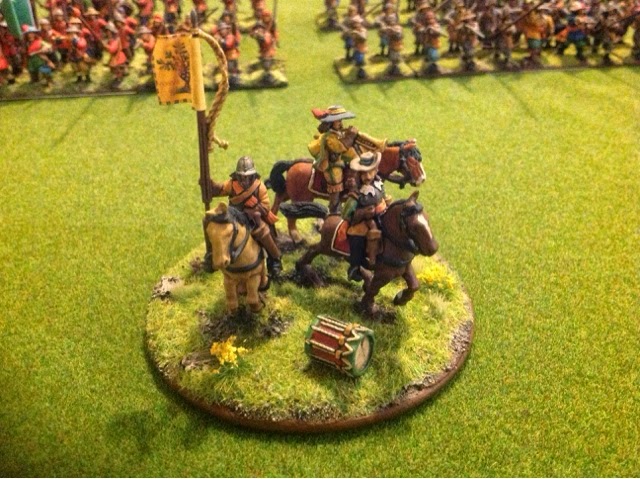 The right and noble Sir William Waller. You will not find a better man in this "Warre without an enemie" 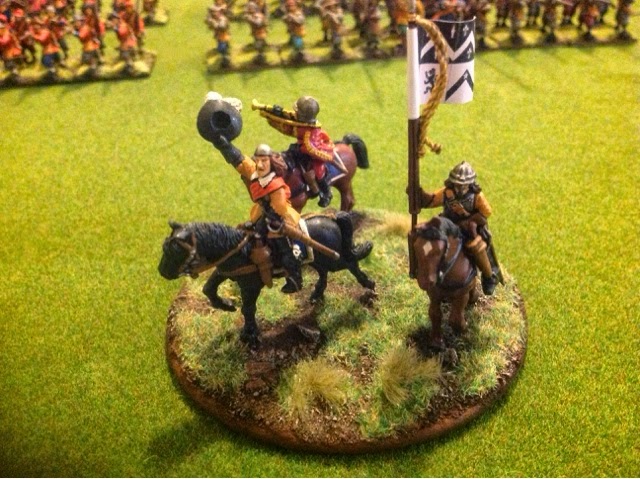 Old Wartyface himself Oliver Cromwell. Commander bases in Blackpowder P&S are great for mini dioramas. Trying to track down the colours for Cromwell pre-Lord Protector/Commonwealth proved a bit tricky with a fair degree of internet trawling until I found this one. 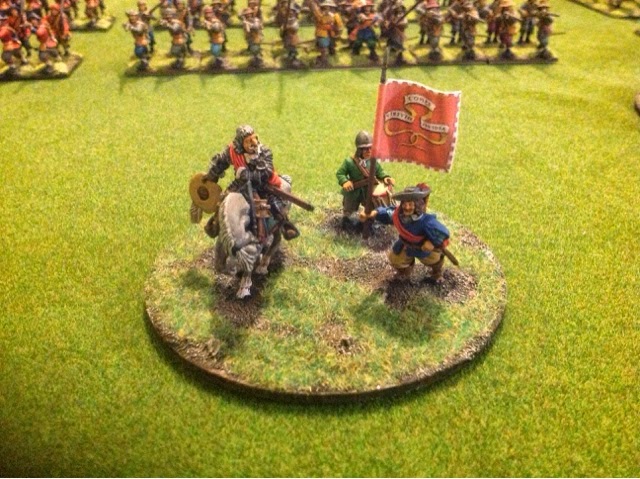 Lord Essex. A very brave commander (He routinely brought his own coffin with him on campaign) but an utter pratt of a strategist! The Royalists ran circles round him almost all the time but he still kept command! 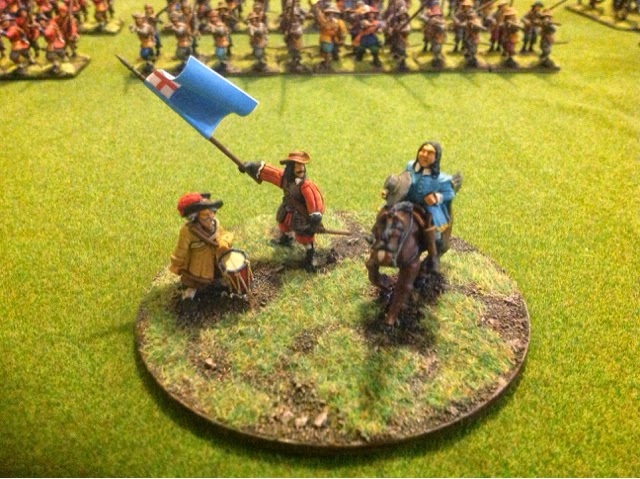 The Earl of Manchester. There is not much to recommend him as a ECW commander and he appears to not be wholly committed to the cause of Parliament. His only saving grace in my opinion was that at The Battle of Marston Moor when the Parliament cause looked lost and Leven, Cromwell and Fairfax ran off, he stayed on the field of battle and rallied his men.
When I started the ECW project I would never have dreamed that we could refight the big battles like Marston Moor, however we now have around 10 players at the club who have armies or are building them. The very social nature of a Black powder game is great. Each player only needs to paint 3-4 units and they can join in a game. Of course most players have more than that. I have no doubt that soon we will be able to replay one of the big battles  such as Edgehill or Naseby. 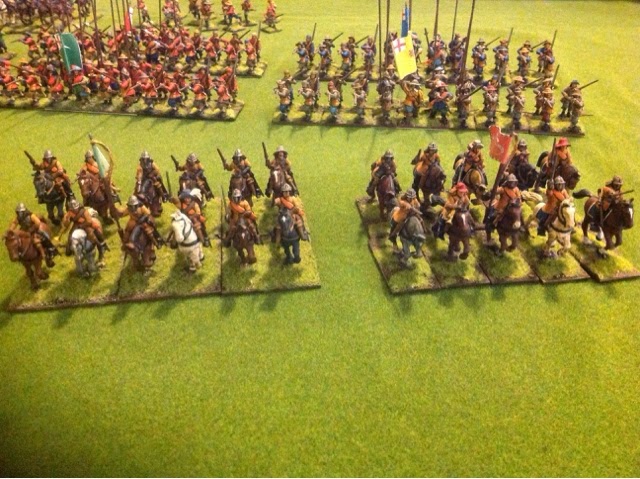 Parliament Horse. Since we use casualty markers in Blackpowder the number of figures per unit is mostly irrelevant. Therefore I will reduce the unit size down to 8 horse. That way i can get more horse regiments on the field quickly and the 8 figure units still look good on the table. 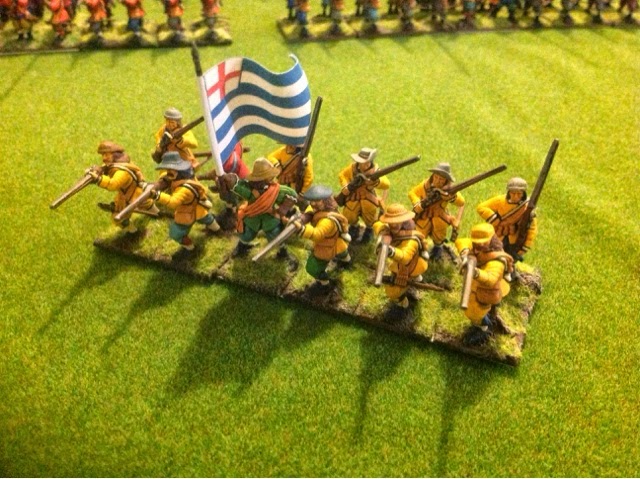 Commanded Shotte and below the regiments of foot. 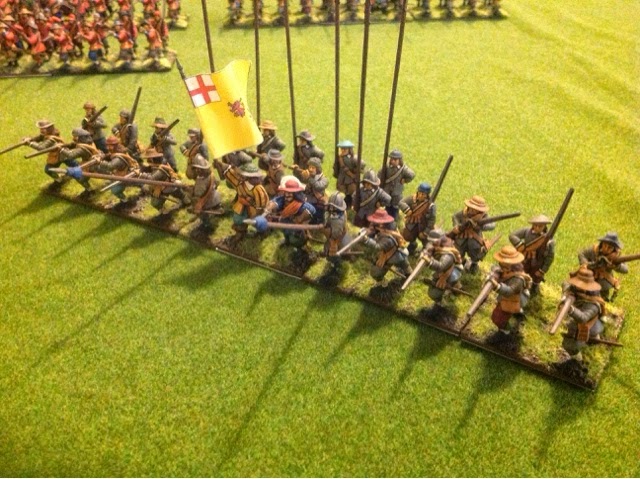 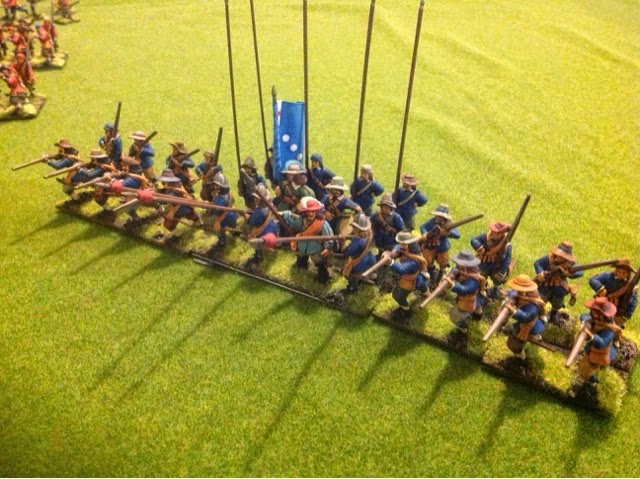 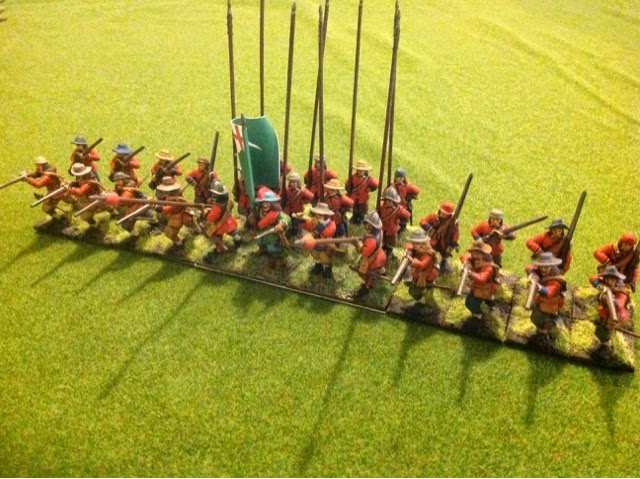 The one that started it all, Sir Ralph Weldon's regiment of foote 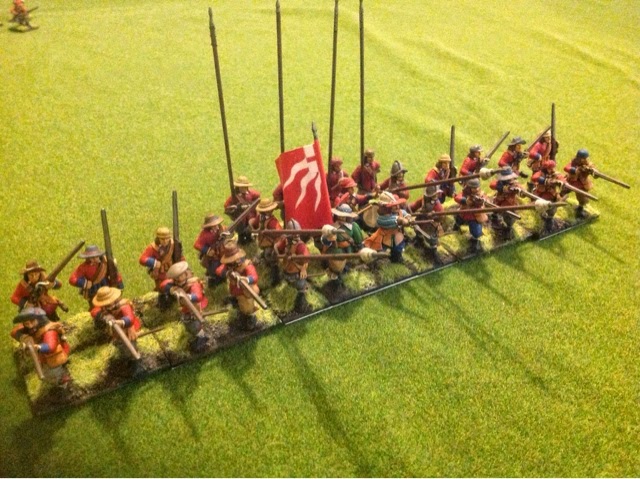 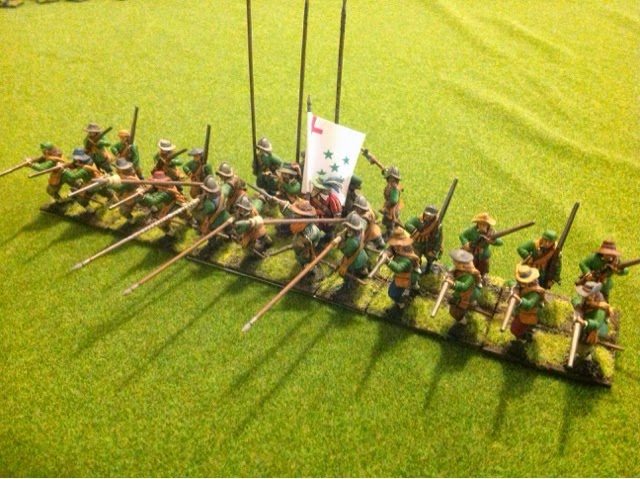 The dragoons. I need to purchase the new horseholders from Warlord Games for these guys. 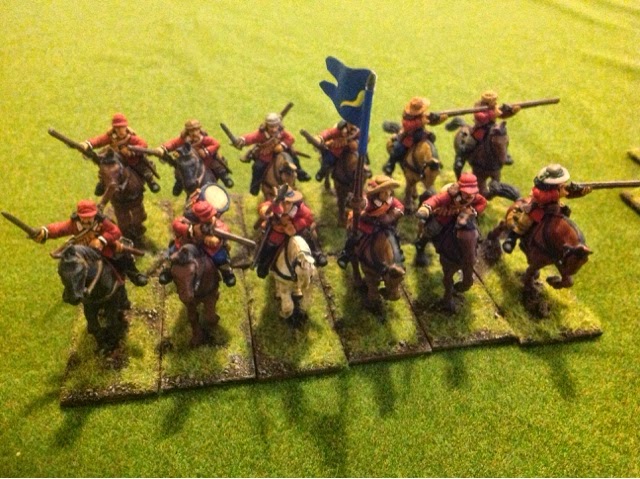 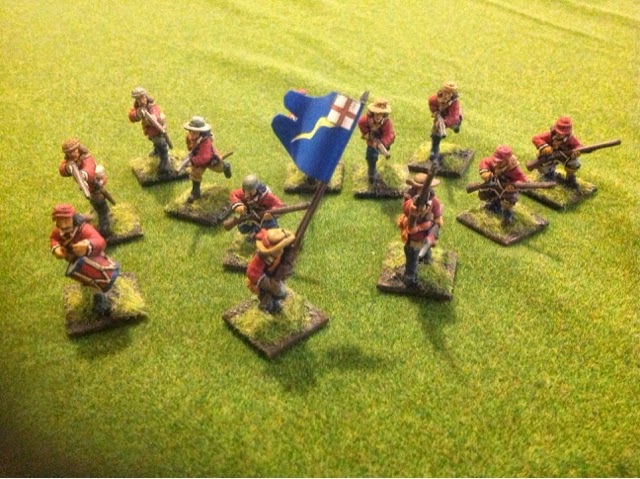 And so there we have it the Parliament army. I still need to put some more work into it to get it where I want it, but I am rather proud of this army, and now I get to regularly put them in the field for fun ECW games with Black Powder.
After the army is complete what next? Scots!
I will post some more pictures of the armies in action soon.
Cheers
Neil
Posted by Neil Hughes at 8:33 AM No comments:

Little lead men of Valour gets the reboot!

Well it has been forever since I last posted on this blog. It's the usual story, work and family commitments taking up my time, and any time devoted to my hobby is taken up with well... my hobby. So even though it would appear from this blog that I had dropped off the planet, was abducted by Aliens, or suffered some other unfortunate demise I have not been idle during my hiatus from this blog.

So it is time for a reboot of the blog. I will in the coming days endeavour to post a lot of stuff covering what I have been up to these past couple of years and what I am working on right now.

Also I will offer some more pictures of other games/periods I dabble in that hasn't got a run on this blog so far.