Yesterday was August 13th. The 70th Anniversary of Alder Tag "Eagle Day" the first official day of the Battle of Britain. To commemorate that day I decided to run a WWII Battle of Britain dogfight game.

Over the last couple of months we have been wanting to expand our Canvas Eagles WWI dogfight game. Canvas Eagles has proven very popular at the club with some games involving over a dozen players in massed dogfights over the fields of France. I have also had a keen desire to play Battle of Britain games, so I have collected a number of 1/144th scale planes. Another club member has also picked up some Hurricanes and Me110 and HeIII.

The WWII rules are a bit harder to track down. Knights Cross is the name for the WWII variant of Canvas Eagles. There is a yahoo group for these rules but the rules and aircraft sheets are a bit haphazard. I spent a bit of time collating the relevant data and playing around with the aircraft sheets in photoshop to make them as similar to the Canvas Eagles sheets so club players could quickly switch over to the new period.

The Knights Cross games are faster than the Canvas Eagles games, mainly because of the higher number of critical hits in the game. Planes tend to smoke, catch fire, or blow up more often, which of course is a lot of fun.

Last night the scenario was the German side launching an attack on the Kenley airfield with two Ju 87 "Stuka" dive bombers and a HeIII escorted by 4 Me109 Emil fighters.  On the British side the airfield was defended by 4 Mk 1 Spitfires.  I found an 1940 aerial photo of Kenley airfield on the net and enlarged it on the printer and stuck onto Hex card sheet to make the objective. To achieve victory the Germans had to successfully bomb 4 out of the 6 airfield hexes. The Stukas had only one bomb attack each while the He III could do 3 bombing attacks.

We had 7 people playing the game, 5 on the German side and 2 playing the Brits. Here are the photos, my camera technique was pretty poor on the night, so I apologise for the blurry photos. 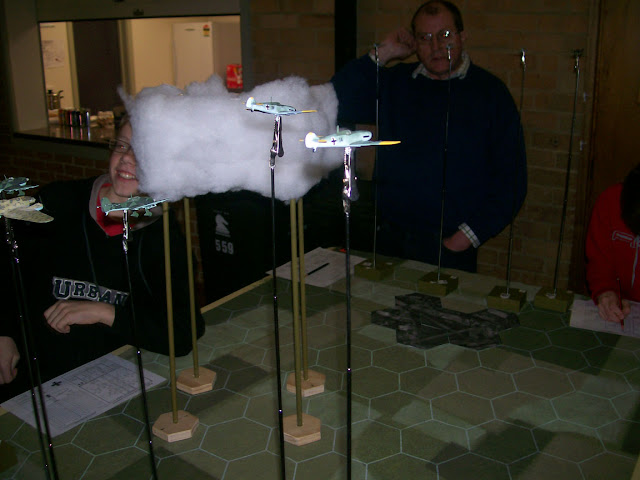 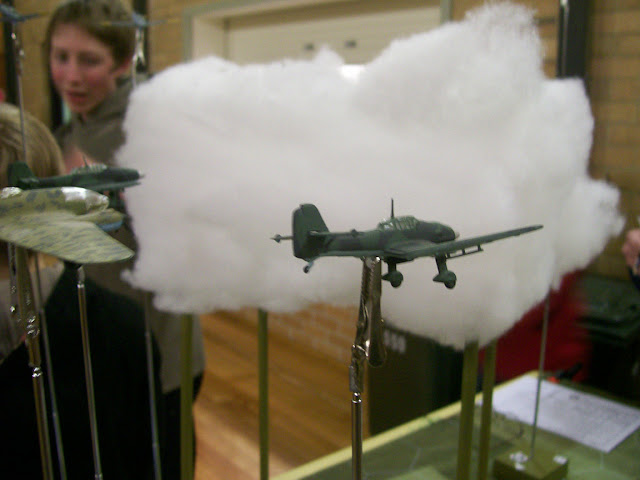 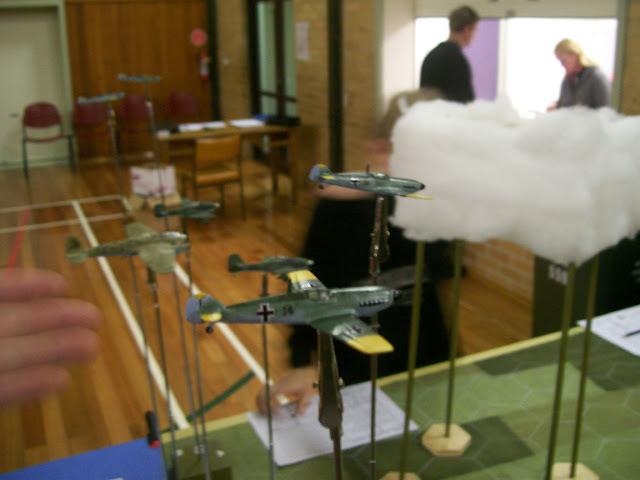 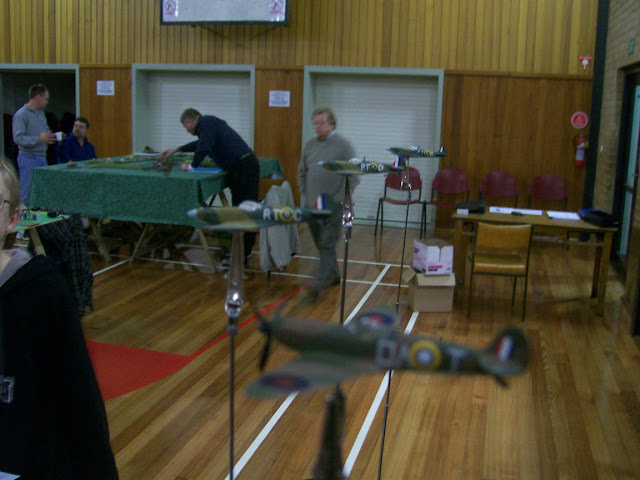 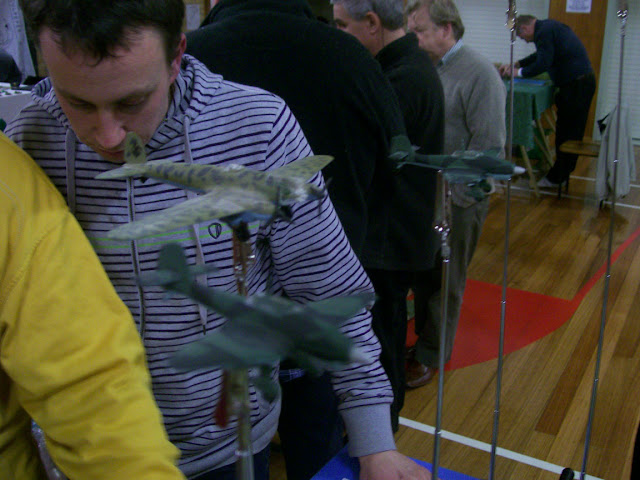 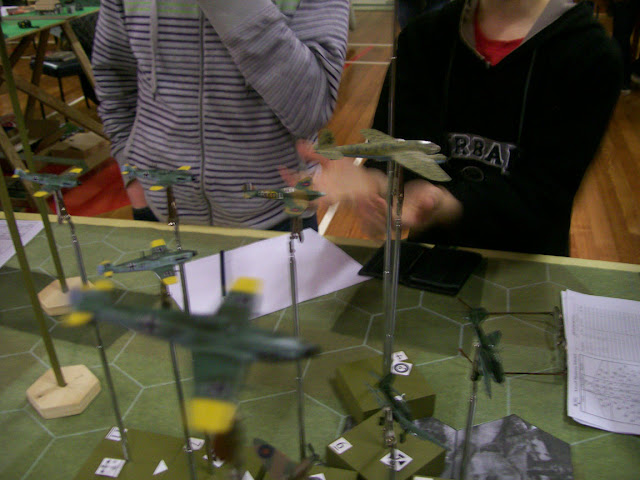 The game began with the German bombers flying straight for the target flank on each side by a pair of 109s at a higher altitude providing the cover. The Spitfire climbed to gain height and split into pairs to take on the Germans. 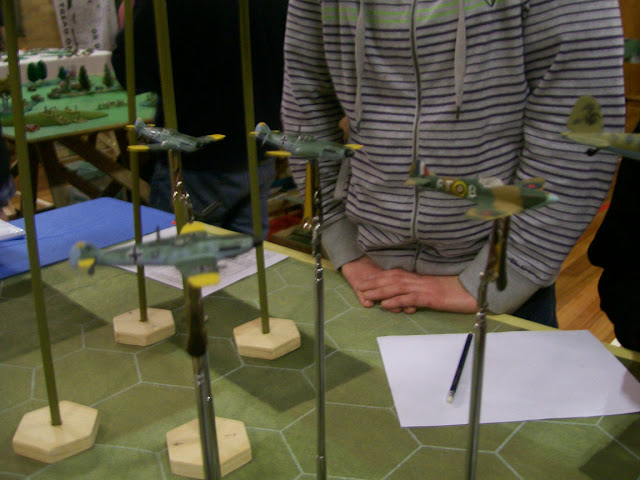 The German Fighters worked well together coordinating their attacks on the Spitfires. The Spitfires however seemed disorganised and this result in several instances where Spifires were surrounded by more than one fighter. The first Spitfire was destroyed by a long burst by a 109 and finished off by a Stuka. The British pilot bailed out successfully. Meanwhile the German bombers dived lower to prepare for their bombing run. 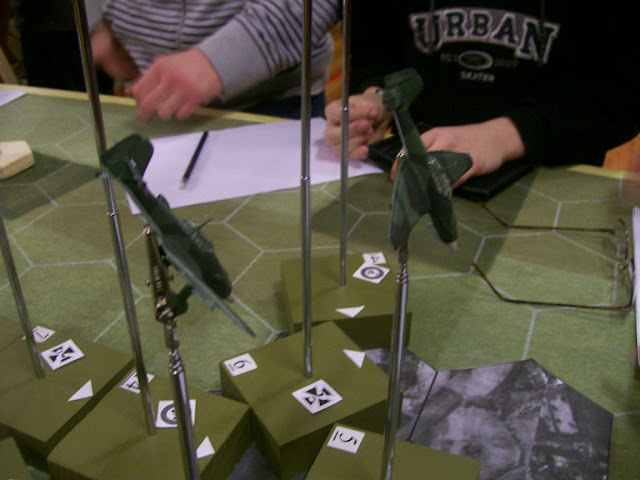 The Stukas commenced their Dive attack on Kenley and both succeeded in hitting their targets. However as they pulled out of the attack one stuka was hit by a Spitfire killing the pilot and sending the Stuka crashing into the ground. The first bombing run of the HeIII failed however. 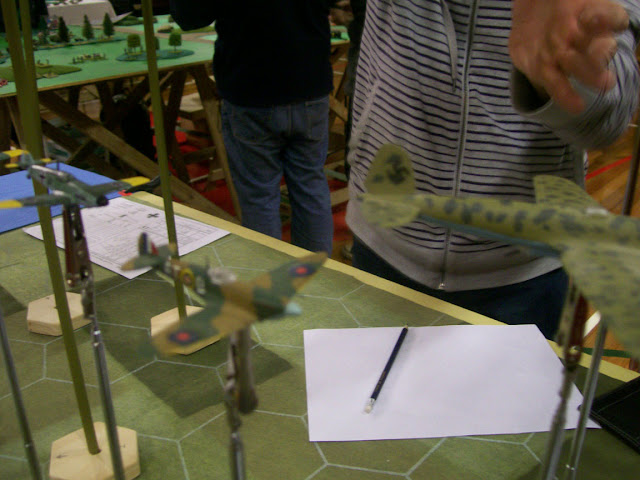 As the Spifires concentrated on the HeIII the Me109s swarmed around the Spifires sending another one crashing to the ground. The HeIII continued its bombing run successfully hitting its next two hexes to successfully destroy the mission objective. 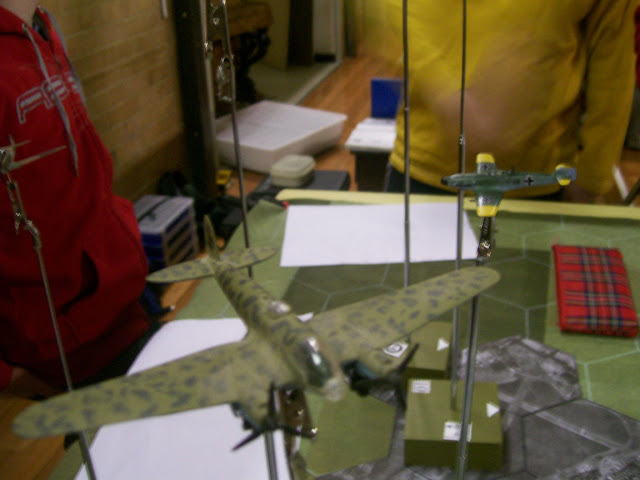 The HeIII and Stuka turned for home pursued by the remaining two Spitfires. One of the Me109s took the term "close fighter support" too literally and crashed into the HeIII. The HeIII survived but with a killed waist gunner. The Me109 broke up and exploded. 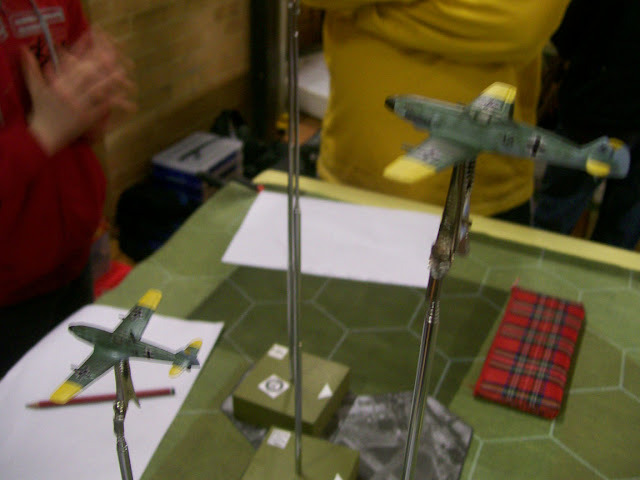 The Stuka made a quick retreat without incident while the damaged HeIII sought the security of a cloudbank to escape the pursuing Spifires but it wasn't needed as the two spifires were despatched in quick fashion, one of the Spits a ball of fire as its fuel tank exploded. The other pilot while wounded managed to bail out successfully. 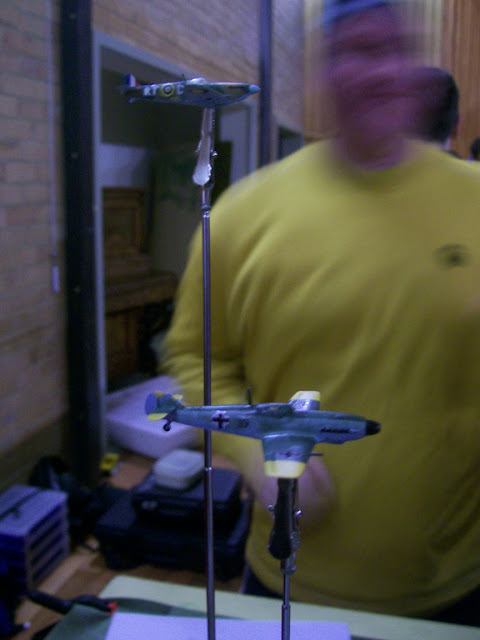 So the night was a reversal of the historical result with a comprehensive victory to the Germans. Kenley had been severely mauled and all four Spitfires destroyed , however two of the British pilots did survive.
On the German side they had lost one Stuka and one Me109 with all three aircrew killed. The HeIII received repairable damage, but lost one gunner. So the German casualty rate of 4: 2 did seem to reflect the historical casulty rate of Casulaties on both sides during the Battle of Britain.
We are planning on having more Battle of Britain games in the coming weeks to commemorate the Battle of Britain.
Cheers Neil.
Posted by Neil Hughes at 12:49 PM 3 comments: