So as the sun sets on another gaming year its time to take stock of this year's gaming, accomplishments and plans for the coming gaming year.

If I had to sum up the year it would mainly encompass one word.....Frostgrave. 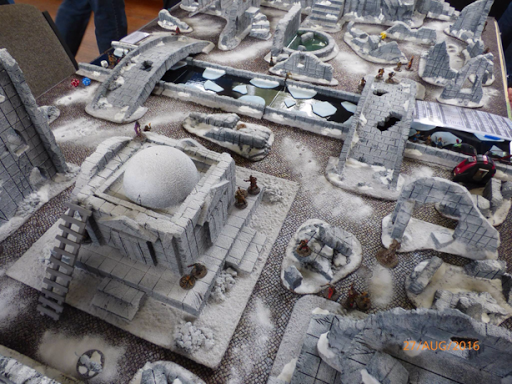 This game has certainly taken up a large chunk of the gaming year. I have painted up many miniatures (probably around 100) and made up a heap of terrain. From little things big things grow as they say, and after starting Frostgrave at our club we now have around eight active players and a campaign in full flight. 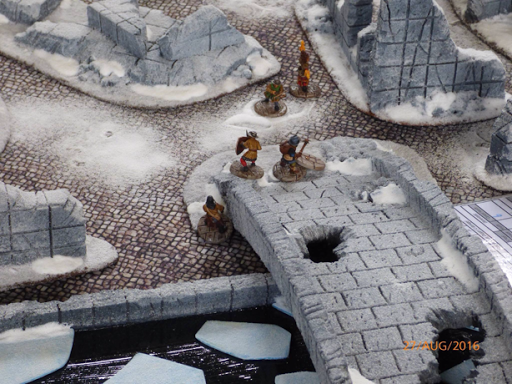 Our games have focused so far, just on the scenarios in the main rulebook, so we have plenty of gaming to look forward to as we work our way through all the expansions. I just recently completed my final purchases (a bear and a vampire) to complete my Frostgrave Bestiary  from the main rule book. I expect a fair amount of my 2017 hobby time will involve adding the creatures from the expansion books and building the scenario specific terrain pieces. I am looking forward to painting some Barbarians from Northstar (lovely figures!)

Beside Frostgrave, some of the other games I played was Chain of Command for WWII and Sharp Practice for black powder skirmish games. Both these rule sets are terrific and I really want to explore these rules with more games. On the painting front I need to finish off a little bit more stuff for my 15mm Early War Germans and Soviets. After that I will probably move on to late war Brits and Germans for Normandy. 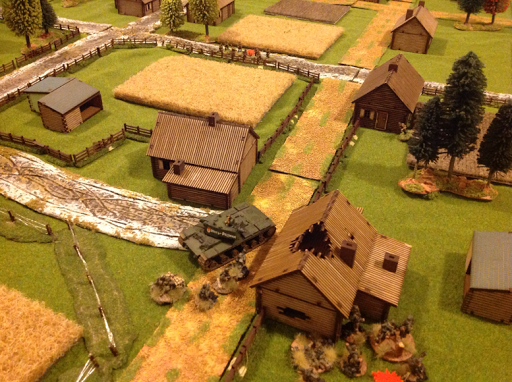 For Sharp Practice I still need to keep working on my Napoleonic Russians and paint up a small French force to oppose them. I also have in the painting queue some seven years war Prussians and Austrians for SP. I need some new terrain for these games also. Some nice German and Russian 28mm buildings. 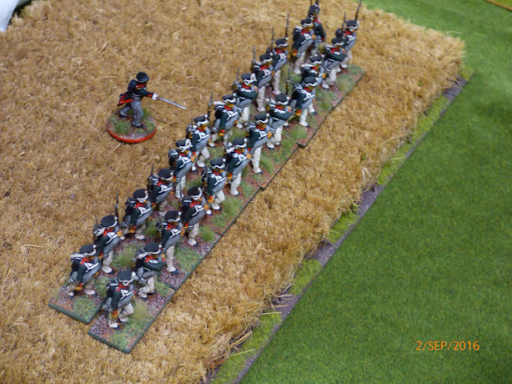 Lion Rampant was another popular game this year. I have a couple more units to paint up for this too so that I have two retinues to play at home. Only problem is the mounted knights are a pain to paint with all that heraldry! I also have a big terrain project planned for this but that's a secret!! 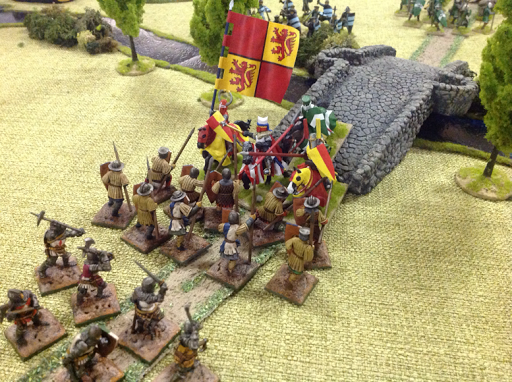 Other smaller projects that occupied my painting time were Early Imperial Romans, Mars Attacks Martians, Super Heroes and my recent Soccer players. I think these projects will continue to move slowly along filling the motivational gaps in my bigger projects. 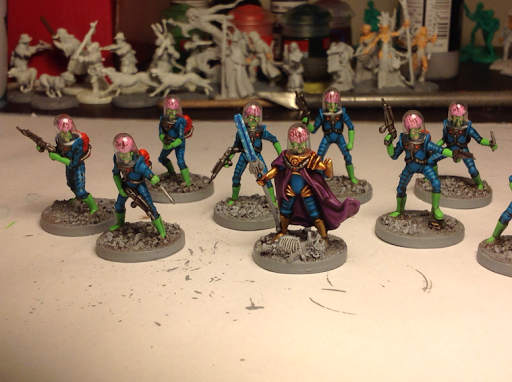 My painting total for the year has ticked over 250 miniatures. I think that was a pretty good effort but a bit shy of the 365 I was aiming for. Next year, if I focus on projects where the figures are more "uniform" like Romans for example, I can probably boost that total. However with around 350 miniatures purchased for the year I certainly need to rein in my purchases so the lead/plastic pile doesn't increase.

I am pretty much set on getting into American Civil War in 28mm. I did have some 15mm figures from Blue Moon but besides our 15mm WWII forces I just can't get excited by painting 15mm figures. I will sell my 15mm figures and I am looking at using Perry miniatures 28mm plastics and building up forces for Sharp Practice games. Eventually working up to Black Powder sized games but probably only SP for 2017.

Another project I am still in two minds to get into. I have been thinking of getting into Saga. Looking at Vikings and Saxons or Welsh. Dark Ages gaming has never been much on my radar. It is fairly popular at the club and I think Saga is a good sized game. I can also use Saga figures in games of Lion Rampant so that is another plus.

Finally we are looking at another Lion Rampant rules variant called "The Men who would be Kings" for Colonial gaming with the period of choice being the Sudan. I already have a heap of terrain for the desert so I just need to paint up a small force and maybe make a Nile river boat or two. Should be a nice small project.

2016 final painting totals and my top five games of the year.

Before I kick off the new gaming and hobby year I would have a final look back on 2016. I covered most things in my previous post so this is just a postscript to my first post.

Painting and purchasing totals for 2016: My final total of painted 28mm figures for the year was 267. 98 short of my target but a good total.
Purchases left me in the red with a total of 391. I received a box of Perry ACW Union infantry as a Christmas present.

For 2017 I am aiming for 365 painted and I want to keep my purchases to a minimum and reduce the lead and plastic pile.

Finally following on from the Meeples and Miniatures podcast where they listed their top five games for 2016, here is my list:

Number 5: Sharp Practice 2 by the Two Fat Lardies.
A terrific set of rules and definitely will feature very prominently in my 2017 gaming. I will be producing armies for Napoleonics, Seven Years War and American Civil War. 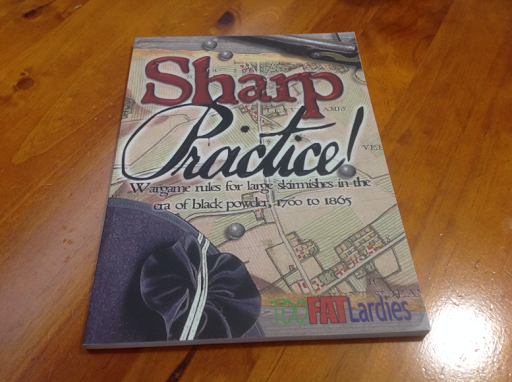 Number 4: Black Powder: Pike and Shotte by Warlord games.
A perennial favourite. I play at least half a dozen games a year and the rules are solid and allow for really big games. 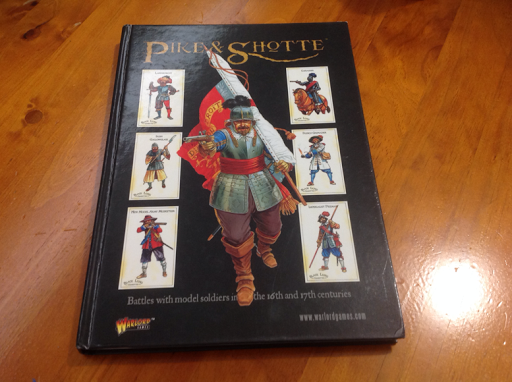 Number 3: Chain of Command by Two Fat Lardies.
A brilliant set of rules. The Lardies really know how to write a god ruleset. I definitely need to play more of this in 2017. 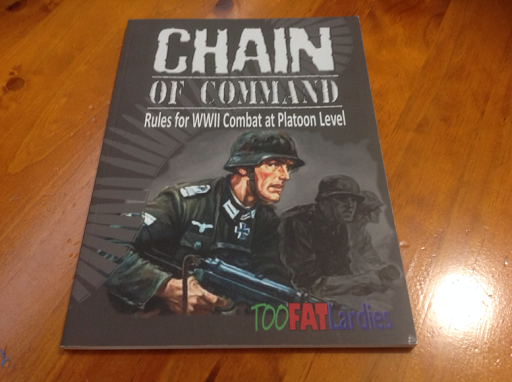 Number 2: Lion Rampant by Osprey Games.
A real fun "big skirmish" medieval ruleset which scratches the medieval itch. I will be playing more of this in 2017 along with its fantasy version Dragon Rampant. 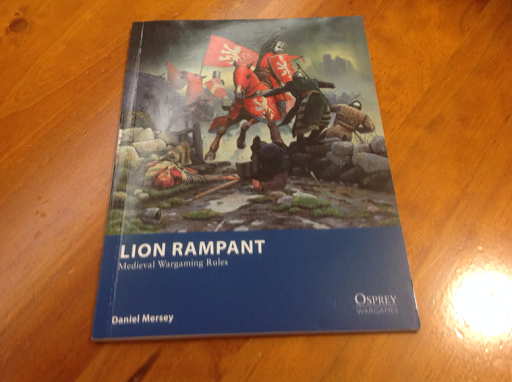 Number 1: Frostgrave by Osprey Games.
Was there really any doubt? A great fun game that gives me a great nostalgia kick back to the eighties and my D&D halcyon days.
We will be working our way through the expansions as we continue our campaign. 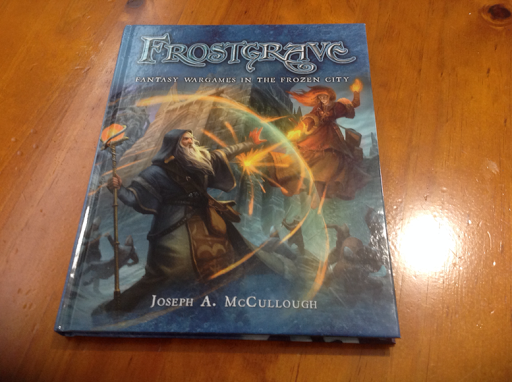 Honourable mention: Super System 4th edition by Four Colour Studios.
Only managed one game this year but the rule set is a lot of fun and allows for creating your own superheroes. Gameplay is quick and really captures the genre perfectly. Another one to watch for 2017. 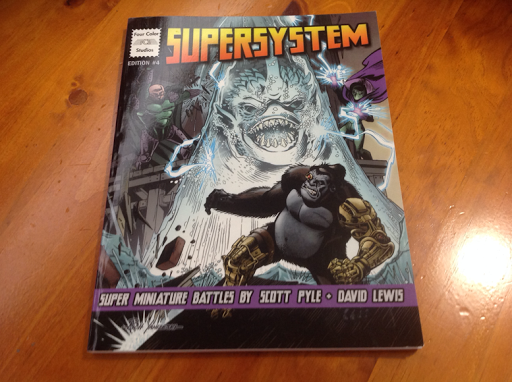 Besides my usual painting targets and playing wargames in 2017 one of my New Year Resolutions is to play more boardgames.
I have a few games sitting on the shelf plus a couple more on the way from recent Kickstarters so I will be posting more on boardgame reviews in 2017.