Hunting for no gooders in capital city.

My newly painted heroes took to the streets of Capital city to hunt down a suspected terrorist armed with a bomb.
Two other super teams being run by fellow club mates Brendan and James (who supplied the fantastic city terrain!) were also joining in the search but couldn't resist getting into some super hero mischief. 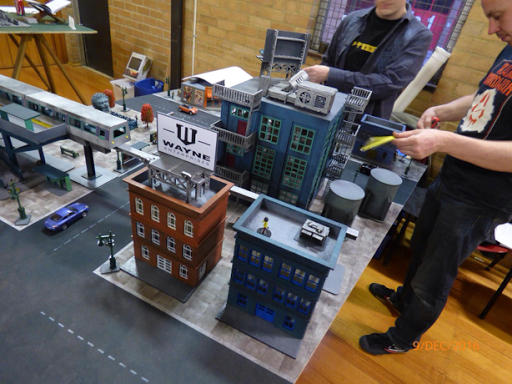 My super team consisting of Back Breaker, Doctor Quantum and Mindstorm move into town to check out the civvies. 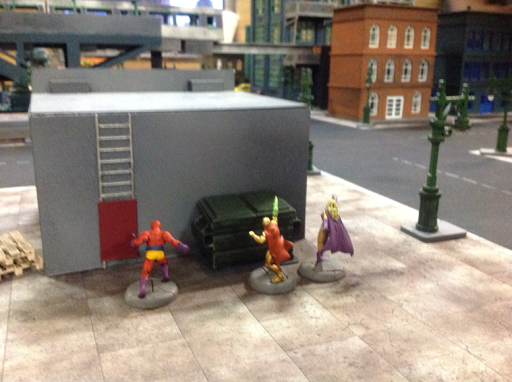 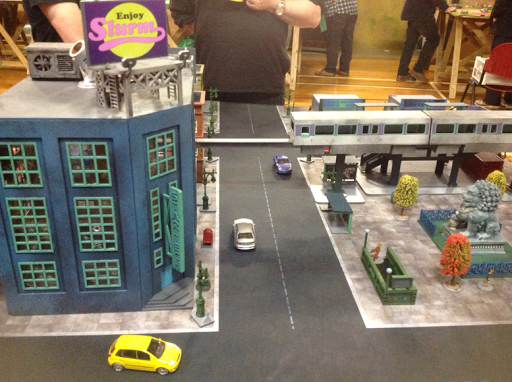 Backbreaker got into a scrap with a speedster but was unsupported. He pretty soon was hurting badly after being thrown through a pet shop. 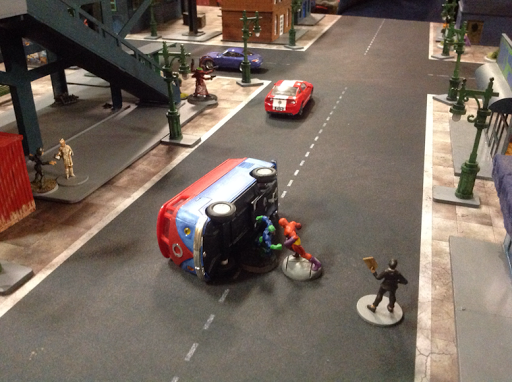 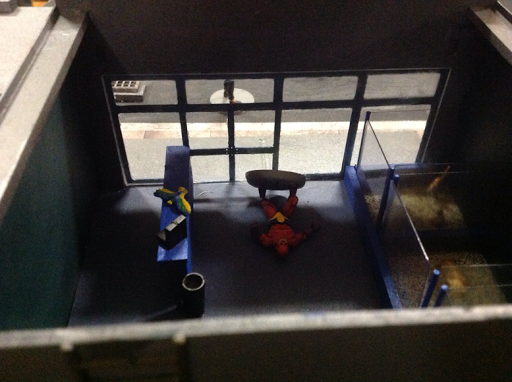 On paper my I thought my team would work well but Doctor Quantum and Mindstorm proved fairly ineffective. I think I need to rejigger their stats to give them more punch.
As it turns out Back Breaker was beaten up for no purpose as it turned out none of the civilians were the terrorist but the Super Heroes will remain vigilant and ready to combat evil doers wherever they lurk.
The game was played with the Super System rules 4th Edition.
Posted by Neil Hughes at 8:13 PM 2 comments:

And so it begins.....Frostgrave campaign 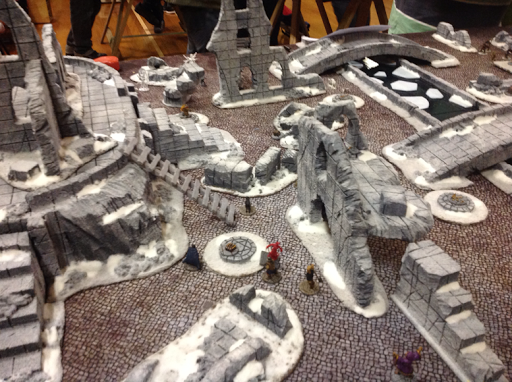 After several practice games we have finally kicked off our Frostgrave campaign at the club.


To familiarize players with the rules we have mainly concentrated on the scenarios for the main rulebook and have not used any rules from the expansion books.


I still need to make one or two terrain pieces to complete the necessary scenario specific items from the main book. Luckily fellow club mate Brendan took on the challenge of making the library scenario (of which he has done a stirling job) so that is one less thing on the "to do" list.


My first game I ran a Summoner warband but the game was a complete disaster. My warband was virtually wiped out by one very stubborn ghoul. I recovered no treasure and my wizard received a permanent injury to boot!  I decided that it would be better to scrap the warband and start again from scratch. This time I decided on an Enchanter warband and he has faired much better. In the next couple of games I still haven't managed a victory, but I have been able to collect some treasure, level up my wizard and progress slowly. Some of the other players wizards are advancing quite rapidly.


I may have to look online for rules about how to deal with the issue of games involving wizards with high levels playing lower level wizards. Some handicapping may be required so new players can join in the campaign.


As of last Friday's meeting we now have around ten active players in the game. It looks like Frostgrave will still be quite popular next year!


Below are some pictures of the first couple of games. I'll post another update in the New Year to let you know how the campaign is going. 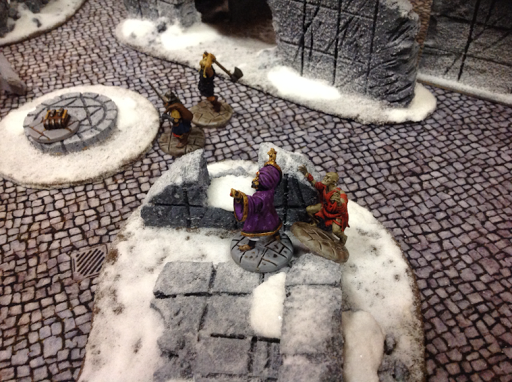 My Summoner wizard about to be mauled by that damn ghoul! 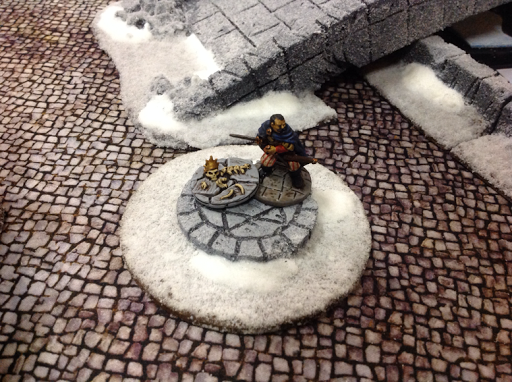 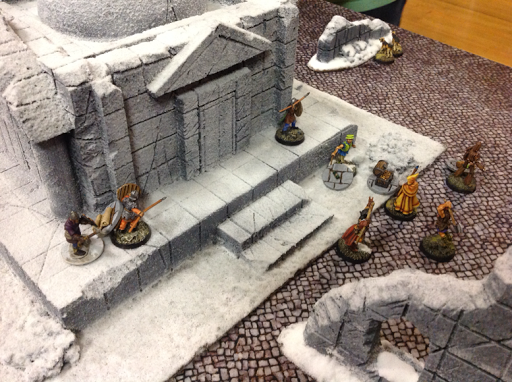 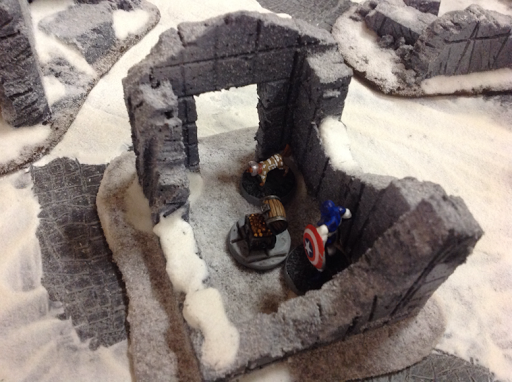 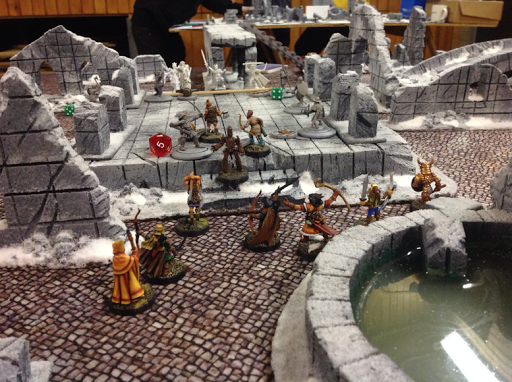 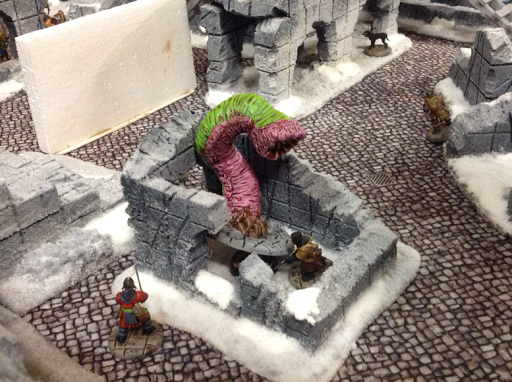 A brave (or foolish) thug goes toe to toe against a giant worm! 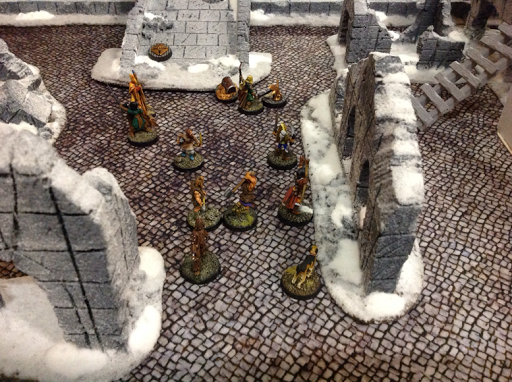 Email ThisBlogThis!Share to TwitterShare to FacebookShare to Pinterest
Labels: Frostgrave

The Battle of Croydon Bridge - an massive ECW mash up!

Last weekend we decided on a big ECW battle to finish the gaming year. We have quite a few players now at the club fielding ECW forces. I am quite pleased with how this period has grown in popularity at our club since I first started my army way back in November 2009!

I was for Parliament, ably supported by fellow Parliamentarian Leith, and stoic Commander of the Scots contingent Jon.

On the Royalist side I was opposed by John with my arch nemesis Tom taking the centre :) and fellow "wrong but womantic woyalist" Ian commanding their left flank.

We decided on a huge "everything on the table" game and ended up with five brigades per side. I was in command of the left wing consisting of one brigade of pike and Shotte (4 units) and the main cavalry force of four units supported by two commanded Shotte units.

Here are the initial deployments with Parliament on the right and Royalists on the left. (sorry for the blurry photos) 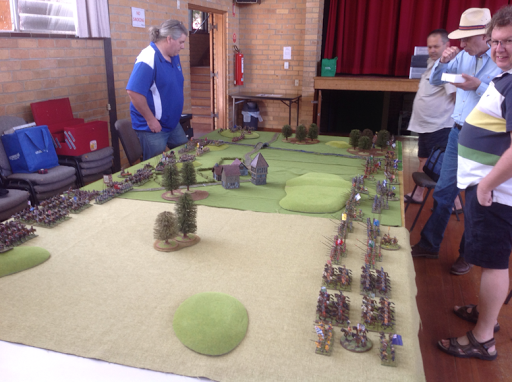 On the Parliament right we had our Dragoons and some horse but the terrain of the woods etc. frustrated that flank with neither side really getting stuck into each other. Leith our commander of the right flank was also in charge of a pike and Shotte brigade which advanced into musket range and began a firefight with the opposing Royalists lined up on the road.

In our centre Jon commanding the Scots was tasked with pushing the Royalists out of the village. He managed to occupy one building but the fight here was a stalemate with neither side gaining the upper hand. 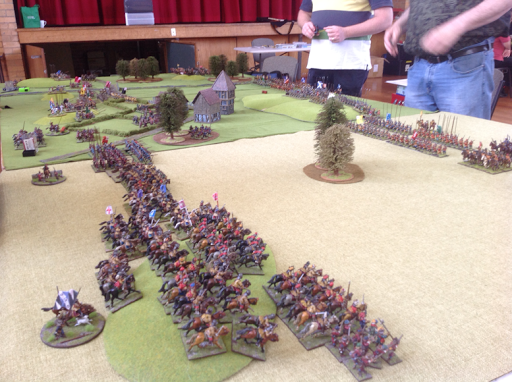 Opposing my flank was the imposing massed Royalist horse, eight units in total outnumbering my horse two to one.
My strategy quickly evolved to delay any cavalry engagement for as long as possible to give time to my commanded Shotte and a supporting pike and Shotte regiment (which protected itself in the small copse of trees) to frustrate and whittle down the opposing horse.


Here you see my defended left flank against the massed horse. John the Royalist right flank commander advance his infantry on his left and began a firefight with my infantry brigade. He had the support of two medium guns which started to tear holes in my ranks. He then moved a cavalry unit to the left of the trees to charge my musketeers and punch a hole in our line. 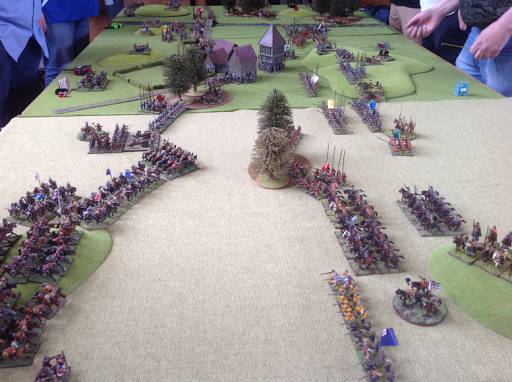 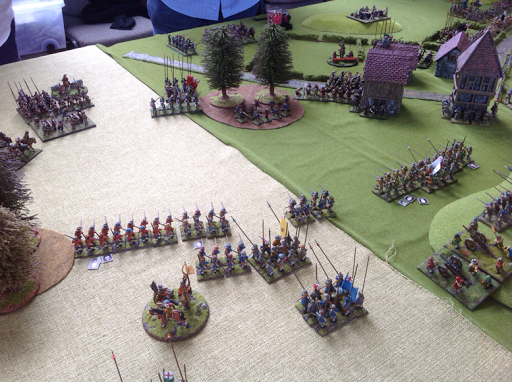 His cavalry charged into my musketeers and in the ensuing melee destroyed one unit of shotte. The fight had reached a critical stage. Another round of melee would most likely destroy the remaining shotte unit and my brigade would be close to breaking.


It was at this moment that Sir William Waller commanding the brigade took the initiative and attaching himself to a pike unit issued a follow me order and charged in to the melee. The ensuing fight swung back to parliament and the cavalry were forced to retire beyond his guns out of weapon range shaken. 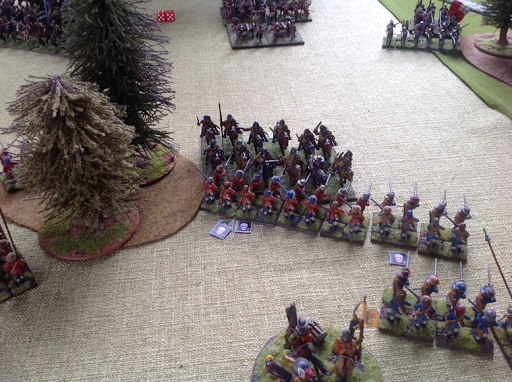 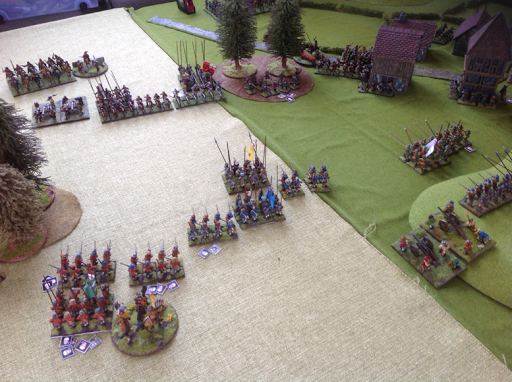 The cavalry was defeated but the infantry brigade was still perilously close to breaking. Waller was able to successfully rally his ragged lines and pulling back out of musket range saved the brigade from breaking.


On my left my commanded shotte and the infantry in the trees were quite effective in their musket fire causing many casualties among the Royalist horse and causing disorder. The fire coupled with the fact that John was new to command and probably a bit more cautious than you would expect outnumbering his foe two to one. Hesitated in his advance, even at one point pulling his entire line back out of musket range. His single supporting unit of commanded shotte lost the firefight against my two commanded shotte units and was shaken.
Meanwhile on the rest of the battlefield the Scots were stalled in the centre as was our far right flank. Leith commanding the right centre decided to force the issue and charged his line into contact with the Royalist foot. A mass melee ensued. 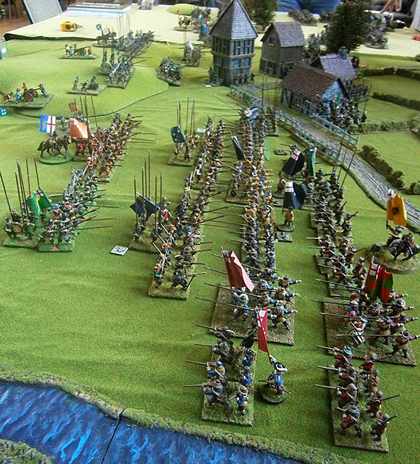 Finally John launched his cavalry forward against my commanded shotte. These stubborn men held their ground and gave a volley tearing into their ranks as they charged home. The commanded shotte fell back leaving his horse blooded and ripe for my cavalry counter attack. 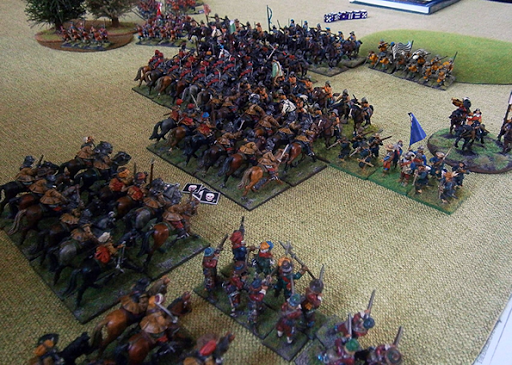 In the ensuing fight one enemy horse unit was destroyed and another shaken. As they fell back my cavalry followed up with a sweeping advance destroying another unit of horse and causing another to be shaken. However I lost one unit of horse who failed a break test.
But by now the damage was done with two units destroyed and three shaken units John's brigade was broken!
My brigade was still in good shape and had the battle continued on I may have swept the field and have been able to take the Royalists in the rear.
Leith and Ian had fought a massive melee with neither side claiming the honours.
As time was called on the game Parliament had a narrow lead but the battle in the centre was likely to determine the final outcome.
Another fantastic game. The Pike and Shotte rules really work well with these really big battles.