Painting miniatures is a funny hobby. For some people, the painting part of the hobby can be seen as a chore and a necessary evil that must be done before one gets to enjoy the "gaming" part. This may mean that figures are given a rudimentary paintjob or worse not painted! Some gamers who still appreciate the aesthetic of our hobby but can't stand the hours of painting, will employ the services of a professional painter.
For my part the "look" of the game ranks almost as highly as the gaming aspect and I always want my games to have the appearance of a moving diorama. I cannot stomach the idea of paying someone to paint my miniatures and I am blessed with having a reasonable amount of artistic talent that has been improved over time with lots of practice. I therefore spend most of my hobby time painting miniatures or making attractive terrain.
However inspiration is a fickle beast and my enthusiasm for a particular project can ebb and flow like the wind. One moment I am gung-ho attacking a project with gusto only for the energy to disappear overnight. This means my painting table is covered with many "in progress" projects.
This year I have flitted from Frostgrave to Russian WWII to Roman legionarys to Medievals to Mars Attacks to Russian Napoleonics to Super Heroes!!
And so I flit again....
I don't even know how this one happened. One moment I was painting Russians Napoleonics and then I find myself not only painting soccer players but also planning to build a football pitch to play my games.
Several years ago I purchased from Eureka Miniatures a soccer set. This set consisted of two soccer teams (15 figures per side) plus two linesman, a referee, two goal posts, corner flags and a streaker to boot! At the time I didn't have a particular rule set in mind to play a game. I do recall there being two commercially available rulesets (I think one was called Corner kick). However I didn't get around to buying a set and so the figures sat in the lead pile waiting. While I moved on to other projects.
It must have been a post or something on Facebook which lead to some web browsing and "hey the rules are available in PDF and cheap!"  A few mouse clicks later and a PDF copy of these rules arrived in my email inbox. 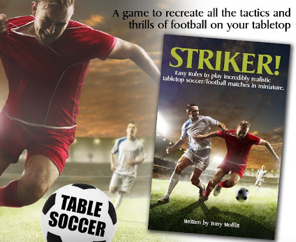 On a first quick read through the rules appear quite good and not overly complicated, which is what you want when playing a fast moving tabletop soccer game. It appears the author lives in Victoria which will make clarification of rules easier.
So now I have some rules so I need two teams and a pitch to get playing.
The Eureka soccer players appear to be around 20mm sized. Since you won't mix these with other games the figure scale doesn't really matter.
The poses are good, the players look realistically animated and there is enough variation in the poses that you will only end up with one or two of the same pose.
I gave them a quick clean up (very minimal flash), mounted them in 20mm round bases and undercoated them in white. My favourite team is Manchester United and I decided on Chelsea as the opponent mainly because the blue is a nice contrast with United's red.
Online you can find historical uniform guides for both teams. The figures uniforms are not strictly modern looking. I think they seem to have the style of the mid eighties so I checked the historical uniforms around this time and came up with an approximation of that look. The uniforms will not be an exact copy but capture the right feel. I have decided against adding players names or any sponsorship because frankly, it's too hard to paint!
Here are a couple of in progress shots of both teams. You can see the myriad of other projects in the background crowding the painting table. 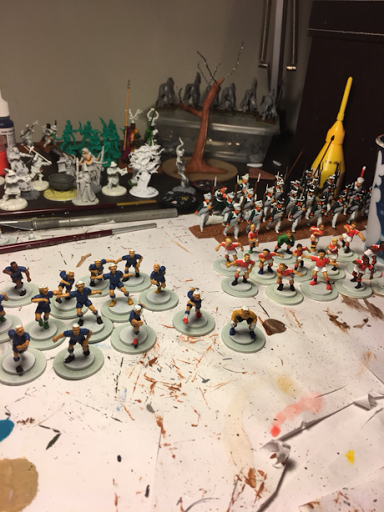 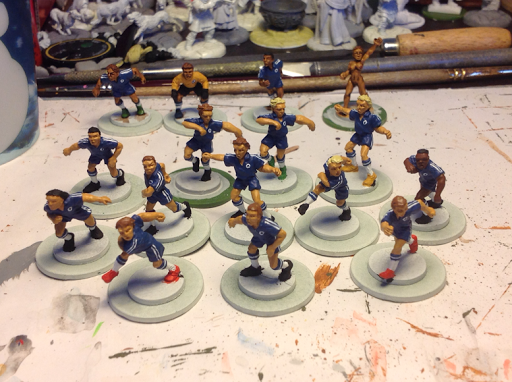 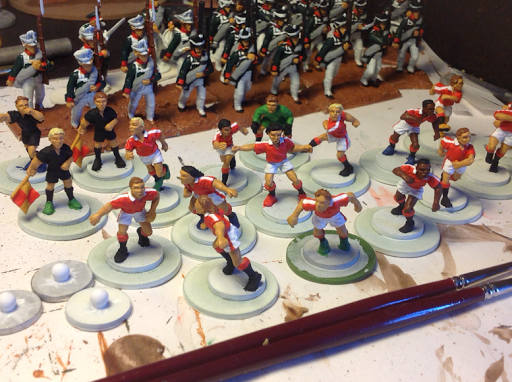 I'll post again when I have finished the teams and started working on the pitch.
Bye for now.
Posted by Neil Hughes at 7:46 PM No comments:


Something has been bubbling under the surface for a number of years at LLMV (Little Lead Men of Valour).


I am a fan of super heroes. Not a huge obsessive OTT fan, but I do enjoy super hero films, and in my time I did collect a number of different super hero comics (Iron Man, Silver Surfer, Avengers, Teenage Mutant Ninja Turtles). Actually on the comic front my main obsession was with British comics Eagle and 2000AD.


Fellow clubmate James Wright (his blog "Lead Capes" has a link on the right) has been running superhero games for a number of years. He has an impressive superhero collection and a fantastic city terrain set up.


His rule system of choice is Super System (now in its 4th edition). Its a nice tidy system that captures the flavor of superhero combat without being tied in to any particular franchise. His games could easily see Hell Boy, The Hulk and Batman battling it out on the tabletop. However the best fun is in creating your own heroes, inventing a backstory and working out their super powers.


Over the past couple of years I have picked up a bunch of heroclix figures (mostly leftovers from James' collection). I have planned to use some of them as the iconic heroes they are, but the more obscure figures can serve as a starting point for conversion into my own personal heroes.


James is planning on running a short series of linked games during November so I took the opportunity to finally get out the scalpel and green putty to modify some clix figures into a new three person hero team.


The three starting characters were The Phantom Lady, Blizzard & Colossus. Each character was removed from its clix base and mounted onto 20mm round bases. I covered the bases with milliput and sculpted in pavement. Each characters was modified with putty.
Here are the original heroclix models: 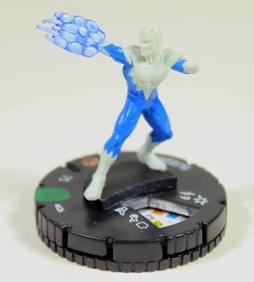 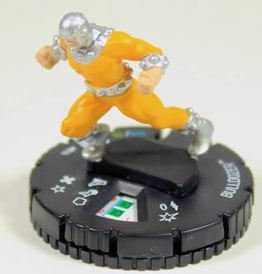 The Phantom Lady had the least modification with a minor remodeling of her eye mask and covering up the cleavage a little.. The blizzard figure was given a cape, belt and jewel in his forehead. However the Colossus figure had substantial remodeling as I had to remove his forearm bands, belt and steel collar and re carve and sculpt his head. I then added putty to cover where I had cut away. There was little facial detail on the model so I sculpted in a mouth.


When cured the models were undercoated with the Vallejo undercoat medium and were ready for painting.
I then came up with a custom paint job and started working out their powers. 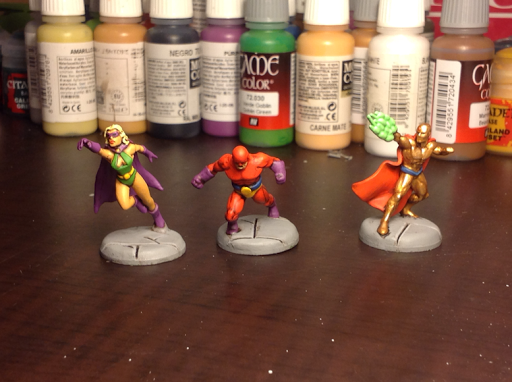 The Phantom lady hero has the power of flight and has basic combat powers but excels in mind powers to confuse the enemy or launch psionic attacks. 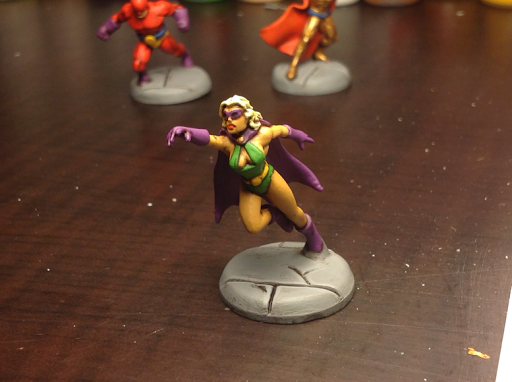 The Blizzard character has a ranged attack power, has reasonable physical fighting abilities and has foresight to see things slightly before they happen giving him an edge in combat. 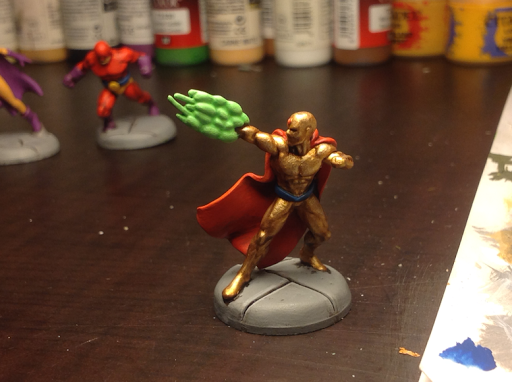 Lastly the Colossus character is the brawn of the team. Super Strong, fairly fast and resilient. Not much in the brains department. Just point him at an enemy and let him loose! 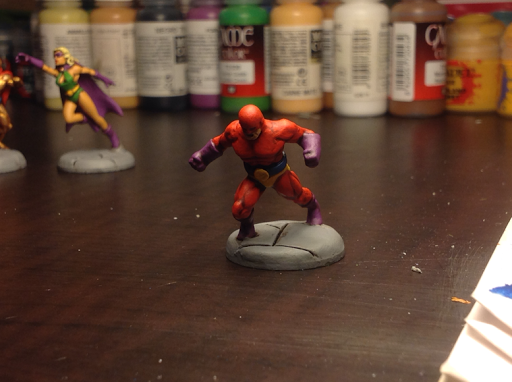 I'm looking forward to getting these into Capital City and throw a few buses around!
Bye for now!