Another year has passed and after the hang over's and ringing ears have passed it is time to look ahead to the coming wargamming year.

Looking back on 2011 I have largely stayed true to my initial plans. I have finally painted enough English Civil War stuff to start playing some games. I also continued painting my World War II 15mm crossfire armies.

The only slight digression from my plans was the pirates. I have so far painted up one team of pirates but I have a couple more crews planned and I need to scratch build a couple of ships.

The War of the Roses 15mm Field of Glory army never appeared. I have bought the figures, but I am really not interested in painting up a whole FOG army in 15mm. The more I think about War of the Roses I want to do it in 28mm (with the fantastic Perry plastics).  In fact the trend towards "God's own scale" 28mm figures continues with only DBA and WWII Crossfire keeping me interested in the 15mm scale.

So what am I planning for the New Year.

English Civil War: I will continue to build up my forces and start painting some Government Scots. We have a mind to do a display of the storming of Bristol at our club open day in August of this year. For the display I will need to scratch build some terrain, forts, town walls etc. and more buildings

Colonial - Sudan: I had planned to do the Zulu war and still want to do it, especially given the release of the great Warlord games plastic zulus and brits and the stunning Rorkes Drift building set. However I seem to have fallen into the Sudan period. It started with a fellow club member making an Arab Gaslight army. I decided to make up North African buildings so we could include the Arabs in our games. I picked up a copy of Khartoum on DVD and before I knew it, I was painting up Egyptian soldiers for the Sudan. My fellow gamer and usual ECW opponent Tom, has decided to join me on this mad venture and has started painting up Mahdists. We will no doubt both end up doing Mahdists to get them done quicker.

Gaslight: I have offered to run a Gaslight game at this year's Little Wars convention in May and I have decided on the theme "Avatar 1884". The game will be loosely based on the climatic battle scene of the film Avatar but set on Venus and the Narvee will be blue skinned Venusian Parrotment aka GW Kroot. I will need to do some more terrain building for this one and paint up some Kroot but otherwise I have enough Brits painted up.

World War II Crossfire: I really enjoy this game and will spend this year building up my forces to play larger games.

Pirates: Arrrrggghhh!!! Not a very big project since I need only paint up about 30 figures and scratchbuild a couple of ships. That's the plan, however pirates are infectious and I could get carried away.

So that's the plan for the coming year. Consolidating my efforts of 2011 with only the Sudan being the new period. The only spanner in the works could be Russian Napoleonics since it is the 200th anniversary of the 1812 campaign. We will see

A Dustup in the West Country!

Our last game for 2011 was an English Civil War game. We had 6 units per side divided into two small brigades with a couple of field guns each. We were using the Victory Without Quarter rules by Clarence Harrison which are a quick play set of rules but have a decent amount of historical feel and play well if a little brutal at times (as we will see later). Wargame figures are mainly Warlord games plastics with some renegade, foundry and old glory thrown in.

Here are some pictures which unfortunately came out a bit blurry. 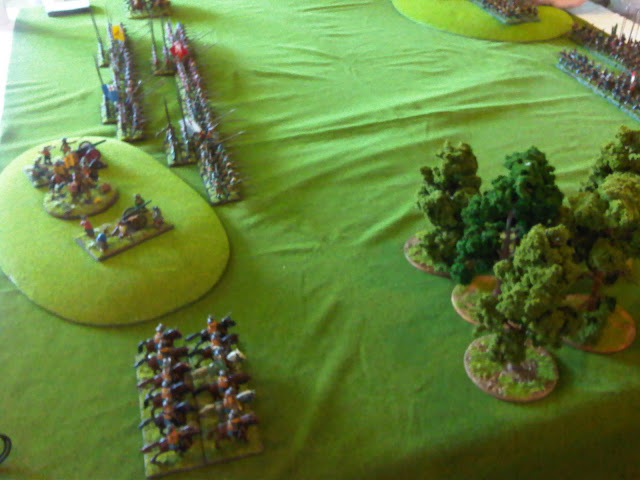 The Parliament deployment on the left. Four units of foot with a troop of trotters on either flank.
Sir William Waller surveys the battle field atop a small hill where the two field guns are placed. 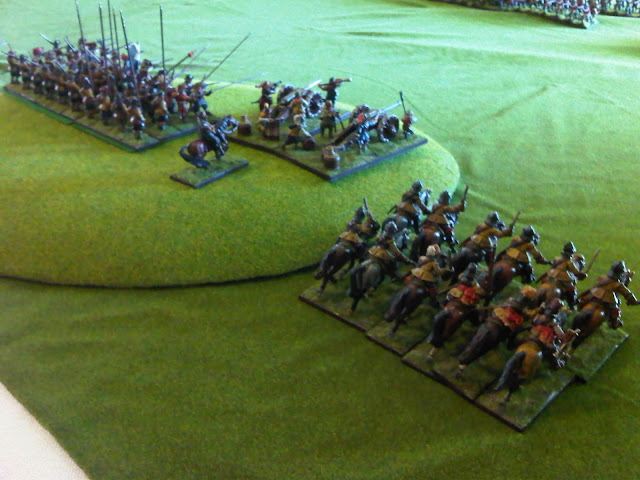 The Royalist right flank. A troop of trotters and one regiment of foot. The rest of the army consisted of a further two regiments of foot, a troop of gallopers and a troop of Dragoons.

The VWQ rules used a card based activation system. As the unit's card is drawn it can peform an action. If a brigade commander's card is drawn they can issue an order to a specific unit e.g hold to rally or a general order to the whole brigade. We allowed units to move twice,once with a brigade order and once when their unit card is drawn to speed up the game. A turn over card adds some unpredictability to the game sequence.

The battle began with a general parliament advance. The royalist foot's initial advance was hampered a bit by their deployment and some unlucky card draws. Some early artillery fire from both sides resulted in some shaken units which had to be issued hold orders to rally. The first real action happened on the Parliament left where the opposing horse fought a pistol duel. 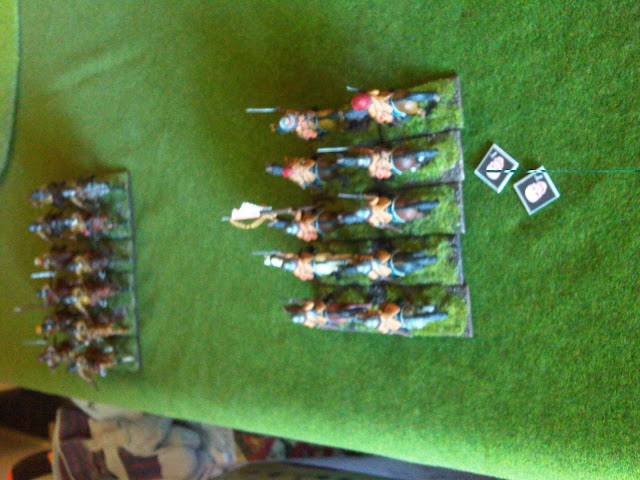 The Parliament horse had the worse of the fight and when the Royalists charged in the were wiped out! 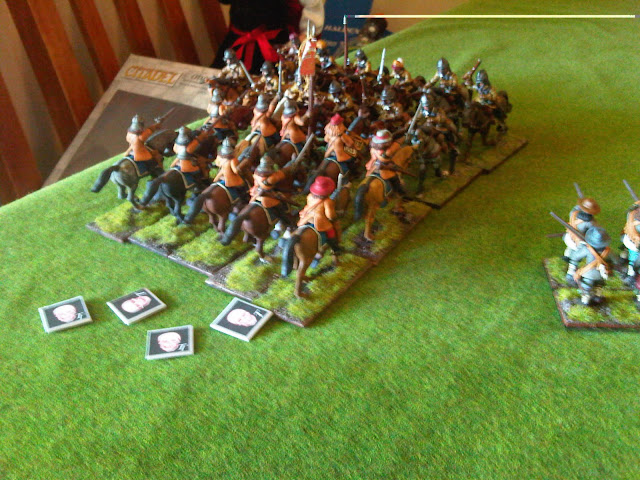 The Parliament horse has taken four casualty markers and are elminated! 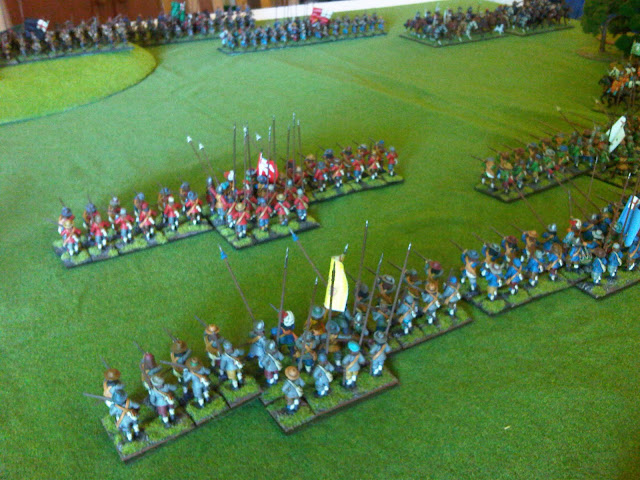 The Parliament foot advance into musket range and engaged the Royalist foot but the losses to both sides were even. Meanwhile the opposing horse on the Parliament right flank approached each other. The Royalist horse were supported by the Dragoons which dismounted and moved through the woods to pour flanking fire into the advancing Rebel horse. The fire from the Dragoons routed the unsteady Parliament horse leaving the rebels with both flanks undefended. From this point on the Parliament's fortunes took a hammering. Sir Ralph Weldon's foot in red tried to charge the shaken Royalist foot but failed the morale test. They then had a second shaken morale test from artillery fire from the Royalist guns and they scarpered! Colonel Samuel Jones regiment suffered heavy casualties in the musket duel and failed their morale checks and also routed. The routing center units caused another foot regiment to also turn tail and the battle was lost! 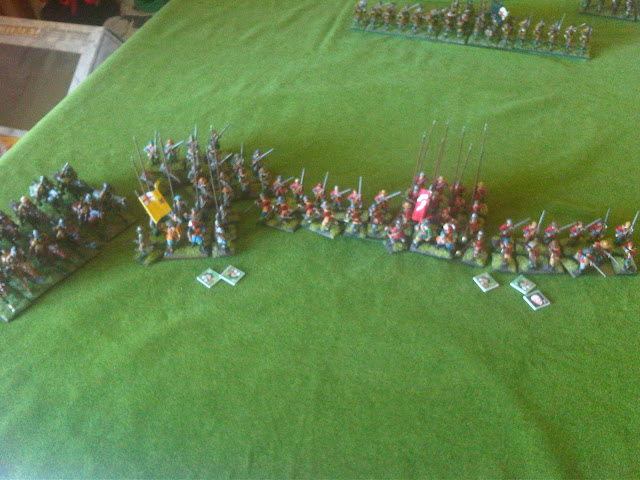 The routing Parliament left. The Royalist foot charged into the routing grey foot and mercilessly cut them down as they ran! The other Royalist horse repeated the same action on the other flank as Samuel Jones green coats were wiped out as well. 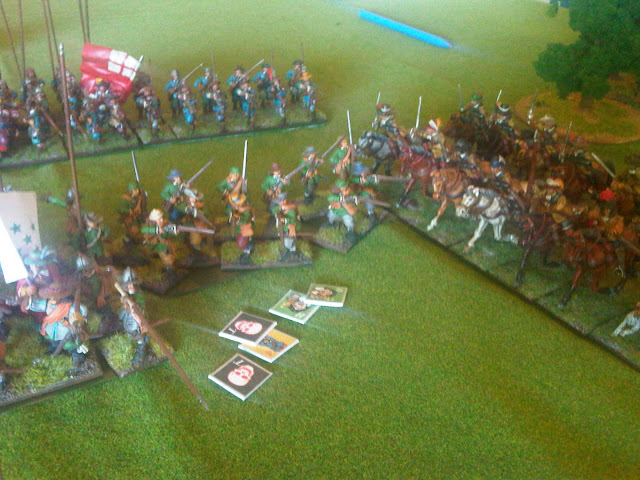 The only Parliament foot to hold its ground was the blue coats but with the whole army routing they had to fall back and live to fight another day. 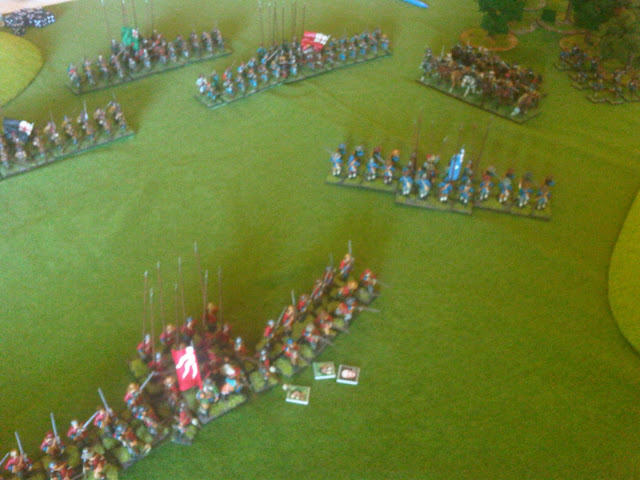 The only good news for the Parliament on the day was the rout of the Royalist gallopers from musket and artillery fire, but it was all too late. 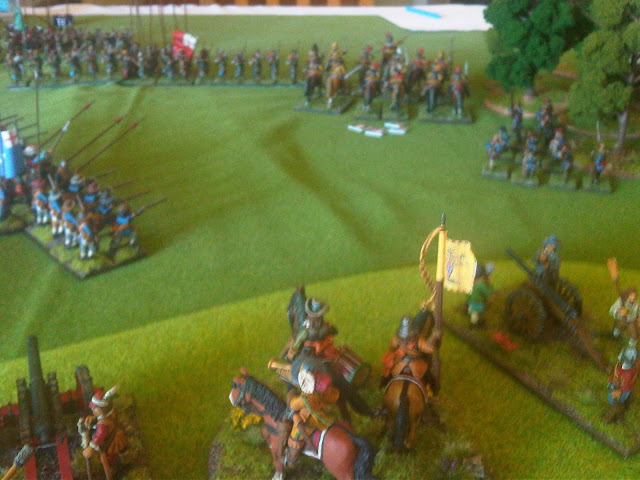 Yet again Waller's forces were defeated by Hopton's.

Even though I was soundly thrashed in the game, it was a lot of fun and we seem to be getting the hang of the rules now and things move along at a brisk rate. We will probably continue with these rules until the pike and shotte version of the Black Powder rules comes out. VWQ has quite a few mechanics which are similar to Black Powder.

We also seem to have "convinced" another player to join the growing group of ECW players at the club and luckily for me he has chosen the Scots so I gain an ally (For the first civil war anyway) to face the many Royalist sympathisers at the club.